NFL chief huddles up in a tough year

Roger Goodell, now in his third year as NFL commissioner, is facing his toughest challenges yet - from the players' off-field behavior to potential labor unrest. 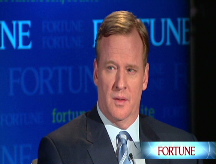 More Videos
Why there are fewer leaders 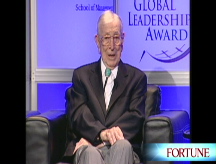 (Fortune Magazine) -- Roger Goodell is one of those rare people who always knew what they wanted to do: On graduating from college, he wrote to his father (New York Congressman and Senator Charles Goodell) that he intended to become commissioner of the National Football League. He nabbed an unpaid internship at the NFL and 23 years later achieved his goal.

Now embarking on his third season as commish, Goodell faces the challenges of keeping NFL football America's best-liked, most watched sport, and building a business that is already the world's most successful sports league (most financial info is private, but annual revenues exceed $6 billion). He talked recently with Fortune's Geoff Colvin about players' off-field behavior, fighting drugs, rookies' rocketing pay, working for 32 strong-willed team owners, and other topics. Edited excerpts:

Fortune: Let's start with the players. You recently gave Adam "Pacman" Jones permission to return to the league after his many arrests and other brushes with the law, and a number of other players have been in trouble off the field, notably Michael Vick. How serious a threat to the league is that kind of behavior, and what are you doing about it?

Goodell: It is serious to our brand. People expect certain behavior from people associated with the NFL. It's a privilege to play in this league, not a right, and I think our players are starting to get that message clearly. We have 2,000 young men who play in the NFL or are associated with it. When you have that many young men, you're going to have some people who make mistakes. The vast majority are super young men, but when they reflect poorly on the NFL and other players, they have to understand the consequences, and I believe they're getting that message.

Fortune: The videotaping of opponents' signals by the Patriots last season has raised questions about the integrity of the game. How are you addressing that?

Goodell: The most important thing is to take decisive action. We discovered that they were taping the signals of visiting coaches, which is against our rules, and we made very clear it was not going to be permitted. [Patriots coach Bill Belichick was fined $500,000, and the team was fined $250,000 and denied a draft pick.] Sending a message that you're going to enforce the rules is the best way to deal with integrity and make sure our fans understand that games are going to be played by the rules. The Patriots are very clear that they violated the rule. Once we had a full admission, we were able to take a very strong position that sent a very strong message to the other 31 clubs.

Goodell: We have. We made a change that is quite significant for the fans - we are going to allow the defensive player to be miked to the coach. So you probably won't need the signals anymore. We're also going to require mandatory signatures from people stating that they are not aware of violations.

Fortune: The NFL's biggest source of revenue is TV, a business that is being revolutionized by the Internet. Will the basic model of the NFL selling broadcast rights to TV networks continue for years into the future?

Goodell: We hope so, because it has been the core of our success. Outside of the Olympics, we're one of the few sports that continues to be successful on broadcast TV. We're proud of that and want to build on that. On the other hand, as you look at digital media, those are opportunities that help build audience. The Olympics most recently demonstrated that this gives us an opportunity to create new interest in our game and to broaden our broadcast audience and benefit our broadcast partners. We're going to be streaming the ESPN Monday-night games into China this year, and we're going to be streaming the NBC Sunday-night games here.

Fortune: The league took a step toward greater control of its media future in creating the NFL Network. But so far most of the major cable companies have not agreed to carry it. What's the problem?