Morgan/Wachovia? Say it ain't so!

Morgan Stanley has a lot of potential suitors. Why would it merge with a struggling bank? 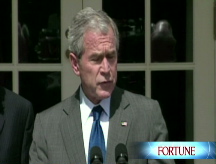 It might be better for Morgan's suffering shareholders if someone stands up at the ceremony and objects.

As the credit crisis escalates, the fact that Morgan Stanley (MS, Fortune 500) - which remains profitable and says it has more than $100 billion in cash and liquid assets to meet its obligations - is seeking a possible merger with a bank makes sense. There is an unparalleled crisis of confidence in standalone investment banks, with three of the five major players merging or disappearing this year. Only Morgan and Goldman Sachs (GS, Fortune 500) remain standing.

Over the past two days, Morgan Stanley's stock has redefined the concept of volatility. At one point, shortly after 1 p.m. Thursday, the stock hit all time lows at under $13, meaning that over $23.5 billion in stock market capitalization had been erased. Around 2:30 p.m. Morgan's shares began a furious rally as news spread of a possible government-led Resolution Trust Corporation-type solution for Wall Street's troubled loans. By 3 p.m., the stock had hit $23.

The credit default swap market, where traders go to puchase insurance against the risk of default - or speculate on the likelihood of increasing balance sheet stress - Morgan's fortunes have been all over the place. This afternoon, traders were quoting insurance on $10 million worth of Morgan debt as costing between $875,000-$925,000 for one year's protection.

On Wednesday afternoon, traders were paying over $2 million upfront to get $10 million in default insurance on Morgan debt.

But a Wachovia (WB, Fortune 500) merger comes dangerously close to putting the hose in the mouth of a struggling swimmer.

Wachovia is number five among banks in write-downs, with $22.7 billion in mostly real estate-related charge-offs so far, according to Bloomberg. In all likelihood there's plenty more to come.

Wachovia has a portfolio of over $120 billion of increasingly troubled option adjustable rate mortgage securities. The ARMS are a legacy of Wachovia's ill-conceived $25 billion purchase of mortgage originator Golden West in 2006.

In July, Wachovia executives told independent research boutique CreditSights that total losses on this portfolio might equal 12% or over $14 billion. Given economic developments since then, this might prove a tad optimistic. With the collapse of the secondary market for option ARMS - in which borrowers could opt to pay even less than the monthly interest tab on their mortgages - the bank is going to have to live with its portfolio for some time.

Unlike the panicked selling which has proven so devastating to Morgan's share price, Wachovia shareholders have reacted logically, sending its stock to the $11 range, a price the Charlotte-based bank hasn't seen since the spring of 1991.

Beyond the $150 billion in liquidity (about $47 billion of which is cash) Wachovia has on tap, it's not immediately clear what the immediate benefits of a merger for Morgan might be, beyond lasting through this panic.

Wachovia Securities dominates no business sector that Morgan is in, nor does the commercial bank have the depth of U.S. or international corporate lending relationships that older money-center rivals have. Like Morgan, it does have a large retail brokerage effort (the former Prudential Securities and A.G. Edwards groups) that could be a key recurring revenue stream.

There is hope yet for Morgan's shareholders. Published reports abound that Morgan is also in advanced discussions with China Investment Corp. to increase its 9.9% stake in the firm to as much as 49%.