As the de facto measuring authority of online audiences, tiny ComScore punches above its weight - and earns some serious coin. 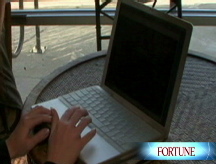 Or maybe not. In April, Google (GOOG, Fortune 500) announced a 30% rise in profit, and analysts surmised that the business wasn't tanking after all. One analyst opined, "The ComScore data have caused a lot of angst and anxiety for investors that look largely unfounded." Over two weeks Google's shares rose 17% - and ComScore's fell 24%. Trust us: Few people in the media business wept for ComScore.

Meet the Internet company everyone loves to hate. All media have de facto measurement authorities - in TV it's A.C. Nielsen; in radio it's Arbitron. The web has ComScore (SCOR) - and its services will run you about $28,000 a month on average. (Actually the web has Nielsen NetRatings too, but ComScore is bigger.) Beermakers, carmakers, and every other business that wants to advertise on the web buy ComScore data to make decisions on where to spend their dollars. Media sites such as CNBC.com (GE, Fortune 500) and NYTimes.com (NYT) pay ComScore to find out who has what market share and, in some cases, to understand their own traffic.

"When P&G tells you that you it won't advertise on your site until you hit a number on ComScore, you have to ask, 'How can I improve my ComScore numbers?'" says John Battelle, founder of Federated Media, an online-ad network based in the Bay Area.

That makes it the referee of the $25 billion (and growing) game of web advertising. And like refs everywhere, ComScore drives the players nuts. The main complaint: ComScore undercounts audiences. CNBC.com says its high-net-worth audience is lowballed. Niche sites like Digg and Yelp gripe that their audiences go almost entirely unaccounted for.

"Some of the criticism I understand," says ComScore's co-founder, Gian Fulgoni, his voice rising. Fulgoni is an animated 60-year-old who could be a stunt double for Dustin Hoffman. His less excitable partner, Magid Abraham, 49, looks on grimly.

They're explaining why their firm is so misunderstood. "But some of the stuff is just really irritating," Fulgoni continues. He notes that the loudly criticized report on Google, for instance, later proved to be accurate. The analysts had drawn the wrong conclusions from the data, which didn't reflect international paid clicks.

Fulgoni's defense against the audience-undercount issue takes more explanation. ComScore maintains million-plus armies of volunteers - or panels, to use the statistical term - who agree to have their online activity monitored in exchange for gift certificates or other compensation. It's a lot like what Nielsen has been doing with TV viewers since the 1950s. It may be hard to believe that in the data-rich environment of today, you still need old-school panels to track what people are doing online. But because of privacy concerns and technical reasons, you do.

Are there limitations to the panel approach? Yes - the self-selection problem, for one. Rich people tend to be less motivated by gift certificates and other petty-cash incentives than the less well-off, which is essentially the argument made by the likes of CNBC.com. Fulgoni counters that the panel's online logs are supplemented with phone surveys, and that high-income respondents have other compensation options, such as giving to a plant-a-tree charity in Central America.

As for missing smaller sites completely, ComScore acknowledges that its methods work better for larger sites, and that tiny ones don't always show up accurately.

But Fulgoni says that's a limitation of statistics, not of ComScore. "People who don't understand statistics will ask, 'How can you possibly project what 200 million people in the U.S. do from a sample of a million?'" says Fulgoni, who, like Abraham, has a numerate background. (They both once ran Information Resources, a big market researcher.) "If you don't believe in sampling theory, next time you go to the doctor and he wants to take a little blood, tell him to take it all."

There may be no easy statistical fixes, but that hasn't stopped others from trying. The most recent: Google, which has a free audience-measurement tool for advertisers. Is it better than ComScore? Too early to say.

Meanwhile, ComScore offers something no one has: audience data that most web businesses accept, albeit grudgingly. And while the company's stock has been erratic - it's ranged from $17 to $42 in the past year - the business has done nothing but grow. Profits last quarter jumped 42% from a year ago.

Says John Swigart, chief marketing officer of auto insurer (and ComScore customer) Esurance.com: "I think they really are the best at what they do." For now at least.