Automakers deserve the $25 billion loan they are getting from the government - and more.

Detroit lobbies for $25B loan 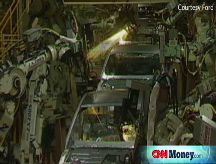 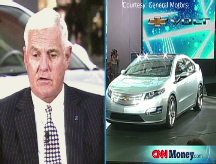 NEW YORK (Fortune) -- Over the weekend, Congress formally approved a continuing resolution that included $25 billion in low-interest loans for the auto industry to speed its transition to more fuel-efficient vehicles.

The loans have been denounced by certain apostles of free markets, who believe the industry - given its history of ineptitude - should fend for itself without government aid.

Nonsense! Consider this a down payment on vast sums that are due the industry because of cowardly, boneheaded regulation by the federal government that has both greased the skids of the Detroit Three on the way to insolvency as well as given aid and comfort to our "friends" in OPEC. By fighting against the irresistible flow of the markets, as well as trying to legislate technology, government has done an enormous disservice to automakers and consumers alike.

Here's why: If Congress sincerely wanted to reduce gasoline consumption and give consumers an incentive to switch to small cars, it has had 35 years since the last gas crisis in which to impose higher gasoline taxes. The taxes would have required consumers to make an economic choice: Continue to drive big, overpowered vehicles and pay at the pump for their excessive fuel consumption, or switch to small cars and reap the proportionate economic rewards. For those who complain that such higher taxes would be regressive and present an undue burden on lower-income drivers, a portion of the revenue could have been rebated to them.

Instead, a Congress fearful of being labeled as favoring higher taxes has chosen the easy way out: ordering the auto industry through CAFÉ regulations to make more fuel-efficient cars. Since consumers were all too happy to keep driving pickup trucks and SUVs as long as gas prices stayed low, CAFÉ forced automakers to sell small cars at a loss in order to boost their fuel-economy ratings. Ten Chevy Cobalts equaled one Chevy Corvette.

In the latest iteration of CAFÉ laws, automakers are being told to make cars that average 35 miles per gallon by 2020. Nowhere, of course, does it mandate that customers have to buy them. Anyone who is willing to pay $60 or more every time he fills his tank can drive anything he likes. And, of course, all the revenue from higher gasoline prices goes to the oil companies and the oil-producing countries. Were the federal taxes in place, the revenue would be replenishing the government budget deficit.

Too little, too late?

The $25 billion in loans will only go part of the way towards underwriting the $100 billion or more that will be needed to meet the new federal mandates. And although all of the rules have yet to be written, it looks like some Japanese manufacturers who have operated plants in the U.S. for more than 20 years will be eligible too. The standards for the loans are high. They only cover cars that are 25% more fuel efficient than the average of the models in their class.

Ironically, the badly-needed funds may not be available soon enough to offset a massive liquidity crunch for Ford (F, Fortune 500), GM (GM, Fortune 500) and Chrysler next year. With sales - especially of high-margin vehicles - tanking and credit markets all but closed to these subprime borrowers, cash is tight. But Energy Secretary Sam Bodman said last week that it might be 18 months or more before the money is actually distributed. That could be too late for some.

You can accurately blame the auto companies for being caught unprepared by the recent spike in oil prices. They were too busy chasing profits to get their financial houses in order after years of destroying capital. But Congress and the government, having bought into the argument that fuel-saving technology could be brought to market with the stroke of a pen, has been a willing accomplice. A simple, elegant, market-based solution was available to them decades ago but they ignored it.

Now we are all being made to pay for their ineptitude.