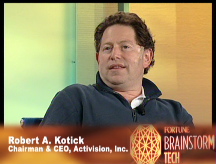 LOS ANGELES (Fortune) -- Judy McGrath, the CEO of MTV Networks, remembers the first time she saw one of the plastic fake guitars that are used in the video game "Guitar Hero." "I'm like, are you kidding me?" she recently recalled.

After all, McGrath is a pop culture maven who has probably logged as many nights at real concerts and hanging with real rock stars as anyone.

But once she saw a demonstration of the virtual game, she immediately saw its potential for music lovers to emulate their idols at home. "Guitar Hero" went on to be a sensation, selling nearly 19 million units in nearly three years, and MTV parent Viacom (VIA) bought Harmonix, the Boston company that developed the game (but no longer owned it), in 2006.

Now MTV may have a bona fide hit of its own in "Rock Band," a Harmonix follow-up that broadened out the guitar-playing concept to add drums, bass and vocals when it was introduced last year. It has sold 3.4 million units through August, according to research firm NPD Group. A beefed up "Rock Band 2" has just been introduced for the Xbox 360 - and other game console versions are about to debut - but its impact on Viacom is already dramatic.

"Rock Band" has stood out as one of the few breakout growth stories on the media company's recent financial statements - during a year when stock in the company better known for its many cable channels and Paramount film studio has slumped. In its latest results, ancillary revenues were up 67% in the first half of 2008, to $639 million, "principally driven by sales of Rock Band." All that growth does not yet translate to the bottom line.

Perhaps more meaningful is the role "Rock Band" has played in bringing back to Viacom some of the musical mojo that MTV has been accused of losing in recent years. After all, a channel that launched in 1981 with the promise that "you'll never look at music the same way again" now generates its buzz with reality fare like "The Hills" and bisexual dating shows. (A strategy that, incidentally, paid off in a big ratings jump over the past year.)

McGrath and Van Toffler, who oversees MTV's music channels, among other things, both told me that they see "Rock Band" as much as a "music play" as a gaming experience; Toffler went so far as to argue that "Rock Band" could be "the new iTunes," because a central part of the business model is to offer, like Apple (AAPL, Fortune 500) does, downloads of songs for players - some 500 by year-end.

That's a fanciful comparison, of course, given iTunes' five billion downloads to date. But "Rock Band" has sold 21 million downloads in less than a year and is emerging as a legitimate new sales channel for musicians. In addition to downloads, "Rock Band" just announced that it will release a playlist consisting of 18 live songs by the veteran rockers AC/DC in an exclusive deal with Wal-Mart (WMT, Fortune 500) - the sort of promotion that has typically been seen with CD releases.

Toffler and McGrath see all kinds of potential for expanding "Rock Band" beyond its core library of classic rock and into releases from newer bands or other genres. More interestingly, since these games show an animated version of yourself playing on a TV screen, there is the potential to meld that character with other online virtual worlds MTV has created. Or perhaps link players to real stars in real time.

"Imagine John Mayer is on stage and you can play with him at home," Toffler said.

The big question is whether "Rock Band" can deliver cash along with musical cache to MTV. Viacom paid $175 million for the company, but agreed to pay earn outs to its investors based on exceeding targets. At the end of last year, according to SEC filings, the company said it expected the payments to total another $208 million, but the final tally won't be done until 2009. Still, Morgan Stanley analyst Benjamin Swinburne estimates that "Rock Band" is break-even and will begin delivering profits to Viacom next year.

Still, "Rock Band" faces yet more competition in November from a new Disney (DIS, Fortune 500)-created game, "Ultimate Band," and skeptics question whether Harmonix has the scale to keep up its momentum. For now, the main source of profits from Harmonix come from license fees from "Guitar Hero," a product it no longer has an active involvement with. Indeed, category leader "Guitar Hero," which is published by a division of Activision (ATVI), has its own souped-up version - "World Tour", featuring drums and a microphone - set to debut this month.

With the battle of the virtual bands about to go into full swing, I asked McGrath if "Rock Band" is the new MTV. She nodded, but then thought for a moment and added: "MTV is the new MTV."

What MySpace Music means for Amazon