The one-time prince of digital media needs a hit product. Its new DVD copying software doesn't look like the ticket. 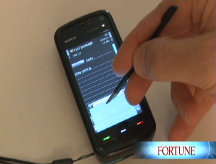 NEW YORK (Fortune) -- RealNetworks sure knows how to do a splashy product launch.

On Sept. 30, as the company prepared to ship a controversial new software package that enables users to copy DVDs onto their computers, it sued the parties that were likely to be infuriated: Hollywood's top movie studios.

The studios, of course, immediately countersued. Now a high-profile battle is raging between RealNetworks (RNWK) and the movie industry - and, so far, RealNetworks is losing. A federal district judge in San Francisco on Tuesday extended an order temporarily barring the company from distributing RealDVD, its new DVD copying software, as the case proceeds.

Meanwhile, RealDVD is the talk of the technology industry. But analysts say they don't understand why RealNetworks would roll out a product destined to spark such a legal battle.

"I just hope they have a minor rather than a major skirmish over this," said Steven Frankel, an analyst at Canaccord Adams. Frankel and others question whether there's really a market for the product.

For now, RealNetworks is back in the limelight. Too often in recent years, the company, once among the dominant forces in the digital media world, has been overshadowed by competitors like Apple (AAPL, Fortune 500) and Microsoft (MSFT, Fortune 500). This is also a company that likes to pick fights.

In 2004, RealNetworks' tweaked Apple by creating a service called Harmony that enabled tracks from its Rhapsody music service to be played on iPods. A cat-and-mouse game ensued in which Apple repeatedly changed its software to thwart RealNetworks.

Real Networks had more success with an antitrust lawsuit it filed against Microsoft to compel the software giant to include the RealPlayer streaming media software in Windows. In 2005, Microsoft agreed to settle the case and paid its smaller adversary $761 million.

Face-off against the studios

RealNetworks CEO Rob Glaser argued earlier this month that RealDVD was "a watershed product" that would enable consumers to "enjoy a much richer experience with DVDs they own."

The company says the software, which would sell for $49.99, respects the movie studios' rights because it prevents users from sharing DVDs illegally on the Internet.

RealNetworks went to court before the movie studios filed suit because it wants to establish that RealDVD is legitimate.

The movie industry takes a different view. Lawyers for Sony (SNY), Warner Brothers, Paramount, Disney (DIS, Fortune 500) and Universal argue that the software would allow users to upload rented or borrowed DVDs onto their computers and "illegally" copy them - without paying the full price for a permanent copy.

"RealDVD should be called StealDVD," fumed Greg Goeckner, general counsel for the Motion Picture Association of America in a statement.

But even if RealNetworks ultimately prevails in court, RealDVD is unlikely to be the hit product that the company needs today.

In the last 12 months, the company's stock price has fallen 33% to about $4 a share. Michael Olson, senior research analyst at Piper Jaffray, predicts that the company's operating income will swing from a gain of $7 million in 2007 to a loss of $36 million this year.

Olson says anybody interested in copying movies to their computer is probably already downloading them for free using file-sharing programs like BitTorrent.

"This is an interesting product because it's aimed at people that are probably already pirating movies," Olson said. "It's ironic. These are the same people who are savvy enough to go out and find a product that enables them to do this for nothing."

Bill Hankes, a RealNetworks spokesman, argues that file-sharing programs like BitTorrent aren't used by mainstream consumers. He said a product like RealDVD would have mass appeal: "That's what we hope to achieve."

There's also nothing to stop competitors like Apple from creating products similar to RealDVD if RealNetworks wins its case.

"They don't have a competitive advantage," said Andy Hargreaves, senior research analyst at Pacific Crest Securities. "Once the door has been busted open, iTunes will say, 'You can copy DVDs on our software, too."

Hankes responds that it important for RealNetworks to lead the charge: "Real has a history of innovating and trying to get to market first with this kind of thing."

RealNetworks needs more than a symbolic victory, though. Five years ago the company's RealPlayer was the second-largest streaming media player, behind Microsoft's Window Media Player.

RealNetworks used its position to get into the digital music business. In 2003, it acquired Listen.com, owner of Rhapsody, a music subscription service considered pioneering at the time because it was the first to license music from all the major labels.

But as soon as Apple launched the iTunes Music Store the same year, it relegated Rhapsody to niche status.

Meanwhile, RealPlayer has lost ground in streaming media, too. As of December 2007, it had fallen into third place with 27 million users, less than it had in 2003 and well behind Microsoft (76 million users) and Apple (48 million users) according to WebSiteOptimization's study of Neilsen NetRatings data.

What MySpace music means for Amazon