As it ends part of long-running legal war, Overstock's case against a short-selling hedge fund rolls on. 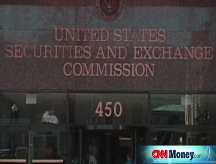 Specifically, the suit claimed that Gradient's series of research reports on Overstock - which, beginning in 2003, were uniformly critical of its accounting and governance - were timed to benefit a group of its short-selling clients, including Rocker.

It also alleged that Gradient made drafts of its research available to Rocker prior to their general release and that Gradient worked closely with the financial media to disseminate its slanted work.

The lawsuit became famous on Wall Street because its filing was followed up by a press conference in which Overstock.com chief executive Patrick Byrne laid out a theory of a vast conspiracy among regulators, hedge funds and the financial media to defame vulnerable American companies. The conspiracy was said to be controlled by a well-known figure from the 1980s whom Byrne dubbed "The Sith Lord." He never disclosed the lord's identity.

[Disclosure: Byrne has singled this writer out for purportedly being under the sway of hedge funds.]

Monday's settlement involved a statement issued by Gradient that apologized for mischaracterizing Overstock's then-board as being non-independent. A spokeswoman from Gradient Analytics declined comment.

Gradient also said it regrets describing Overstock's accounting policies as being outside of generally accepted accounting procedures, or GAAP, which is traditionally a red flag for securities analysts.

In turn, Overstock said it will now press ahead on its case against Copper River.

"This was a great step forward for the litigation in this case," Byrne told Fortune, adding that the removal of Gradient was "a not-so-positive development for Copper River." He characterized Gradient's retraction of its criticism of Overstock's board composition and accounting as "important."

David Shapiro, Copper River's lawyer, said, "We are looking forward to going to trial against these guys; they have absolutely no case." Trial is set for the spring of 2009.

Settlement discussions between Overstock and Gradient have gone on for about six months. Any financial terms were not disclosed.

For Gradient, a settlement made economic sense. It is a small company and its insurance coverage was running out, according to a person familiar with its operations. Much of its free cash flow had to go to defending itself in this case as well as another suit filed against it in February 2006 by Canadian pharmaceutical company Biovail. Moreover, if it lost, it would be unlikely to be able to meet any judgment against it and would have had to file for bankruptcy, according to the source.

It bears noting that Gradient did not retract its critique of Overstock as a risky proposition for investors. In deposition testimony, Gradient co-founder Donn Vickrey said there never had been a conspiracy between his firm and the hedge fund and that Gradient had been writing critically about Overstock a year before the Rocker fund subscribed to its research.