Europe to U.S.: You messed up the rescue, too

The plans for a massive bank bailout by European governments differ strikingly from the U.S. approach. 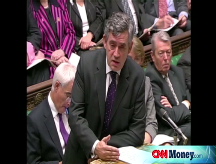 More Videos
TALKBACK
Will the U.S. lose its financial superpower status?
Have your say

PARIS (Fortune) -- First you mess up the world's financial system. Then you blow the rescue of it. Now let's show you how to do it properly.

That, in a nutshell, is the less-than-flattering message European governments are sending to the U.S. as they mount their own gigantic bank bailout. The plans, announced Monday after two weeks of dithering, involve Britain, Germany, France and some others recapitalizing national banks that require help, and providing state guarantees and other measures to kick-start the stalled credit market. The details are strikingly different from the U.S. approach adopted by U.S. Treasury Secretary Hank Paulson and the Federal Reserve Board. And there's a big reason for that: The Europeans think Paulson got it badly wrong, and have watched aghast as he failed to restore confidence in the world's financial system.

In particular, they now think - and are openly saying - that it was a huge mistake to allow Lehman Brothers to fail. But they also believe that the $700 billion bailout plan was badly misdirected. Rather than buying up toxic assets, as the Paulson plan initially intended, they believe the role of government intervention should be to recapitalize the banks directly in exchange for some control of operations. That's at the core of the European plans announced Monday (and apparently the direction Treasury is now heading, too).

Much of the griping has been taking place anonymously, so as not to cause political ructions. But France's Finance Minister Christine Lagarde cast aside diplomatic niceties on the eve of last weekend's G-7 meetings in the U.S. when she told French radio: "as soon as you let one domino fall, the rest risk crashing down."

While not defending Lehman - "there were certainly bad decisions taken by that bank, bad management," she said, Lagarde nonetheless argued that allowing the investment bank to fail merely heightened anxiety in international banking and led to the seizing up of interbank lending. It's an argument that has now become conventional wisdom in Europe, where the mantra for this week's rescues is: Relax, no bank will be allowed to fail.

Too complex, too opaque

The second lesson from the U.S. handling of the crisis concerns the way government money is best used. Here the Europeans have a valuable precedent: Sweden's banking crisis in the early 1990s, which was resolved by the state forcing a consolidation and clean-up of the system even as it kept the banks afloat. Starting in Sept. 1992, the government in Stockholm announced a general guarantee for the whole of the banking system, encouraged the central bank to organize massive injections of liquidity, and created a state agency that essentially forced banks to give up any remnants of make-belief accounting and quickly write down the value of their assets to much more realistic levels. The strategy worked, and Urban Bäckström, the former Swedish central bank president who played a central role in the rescue, has said that "prompt and transparent handling" of the problems were a key to the success.

By contrast, the initial Paulson plan involved the U.S. government buying up the problem securities of banks in a procedure that risked being anything other than prompt and transparent. "It looks as complex as the credit derivatives that caused the problem in the first place," one top European finance official told me, on condition I didn't quote him by name.

Of course, this is not exactly a time to crow, and there are some big unanswered questions about the European solution, too. One is just how tough governments will be in imposing their conditions on national banks, including forcing mergers of stronger and weaker ones. That's particularly a concern for Germany, which has the most fragmented banking sector of any of the big European nations and has the biggest potential for discovering nasty surprises. Germany's problem is that any banking consolidation is likely to run into opposition from regional authorities, who have a say in the running of savings banks networks. And with national elections scheduled for next year, the fragile coalition government under Chancellor Angela Merkel doesn't have a very strong hand to play.

Her finance minister Peer Steinbrück, who could end up as her challenger in the election, has been among the most vocal European government official complaining about how the problems started in the U.S. sub-prime market - and how they will result in the erosion of American influence. "The U.S. will lose its superpower status in the world financial system," he has said, predicting that the dollar will also lose ground to the euro and the Japanese yen.

Stock markets for the moment are applauding the concerted European response. Only time will tell whether they're getting it right. It puts a huge onus on governments to fix the system, and the track record there is mixed. France nationalized its banks in the 1980s under President Francois Mitterrand for ideological reasons, but made such a mess of the job that it privatized them again. Still, after two weeks of conflicting and contradictory moves and statements in Europe, a bit of coordination certainly feels good - and if it looks like it stands a good chance of working, all the better.