Asus created a new market with a small, inexpensive portable computer for soccer moms and their kids. 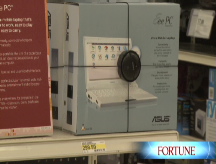 SAN FRANCISCO (Fortune) -- Ever heard of a "netbook"? They're small, light, machines that sell for as little as $250 to just north of $600 - and they're selling like hot cakes.

Today, if you look at the 15 best-selling laptops at Amazon, 13 are netbooks. You might think of these computers as a cross between a Blackberry and a full-blown laptop. Netbooks are great for e-mail, Web surfing and accessing Web-based applications, but they're not what you want to work on all day creating presentations or editing a stack of digital photos.

Taiwan-based computer maker Asus launched the netbook revolution about 18 months ago with the Eee PC. With a handful of the plucky little machines in its lineup, Asus projects to sell 5 million netbooks in 2008.

With those kinds of numbers, the competition is paying attention. Everyone from HP (HPQ, Fortune 500) to Dell (DELL, Fortune 500), and all the Asian-based manufacturers now offer their own versions of a netbook. This year Intel (INTC, Fortune 500) launched its Atom chip, a small, low-power, low price processor tailored for these kinds of machines. Clearly the netbook is here to stay.

The reasons for the popularity of the Eee PC and its brethren are its low price and dead-simple use. When the Eee PC was conceived, making the machine uncomplicated (the three "e's" in Eee PC stand for easy to work, easy to learn, easy to play) was the key driver in its design.

"Our target market was kids and moms," says Asus North America President Jackie Hsu. "People who didn't want or need a full-blown laptop." These are also people, as it turns out, who are increasingly doing computing tasks using Web-based services (the Cloud in today's parlance) like online games, Facebook or Google Calendar that don't require hefty computing on a local machine.

As is usually the case with new technology, the early-adopter crowd was the first to snatch up Eee PCs when they launched in the United States about a year ago. Part of that was due to its Linux operating system (there are Windows versions now), but as with all technology, it was its sheer newness that got people excited. But that market quickly moves on to the next new thing. What has happened since is exactly what Asus had hoped: Kids, moms and people needing a second laptop are buying the machines. At a recent layover in Newark airport, I spied a handful of soccer moms and their kids taking advantage of free WiFi and all tapping away on Eee PCs.

The next step for Asus is to solidify the Eee PC's place in this non-techie marketplace. To that end, Eee PCs are selling in Toys-R-Us, Target (TGT, Fortune 500) stores, and holiday catalogues from Saks, all retail channels that you don't associate with computers. "The whole point," says Asus' Hsu, "is to help them expand their brand to their customers. With the Eee PC they can do that."

You don't back up? The storage industry wants you