The automaker is in trouble, but even Chapter 11 would be better than hooking up with Chrysler. 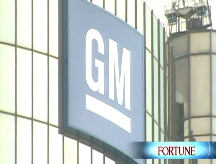 NEW YORK (Fortune) -- GM certainly is keeping a close eye on its cash these days.

One supplier reports he is now getting paid 60 days after he presents an invoice - not the 30 days he was used to. Worse, the clock doesn't start ticking until after the bills get approved in Detroit - and then sent to Arizona for processing.

Next thing you know, GM will be inflating its float by cutting supplier checks on banks in Fiji that will take weeks to clear.

It is a measure of GM's desperation that it is reported to be considering a linkup with Chrysler to get access to Chrysler's cash so it can remain in business. The idea has provoked nearly universal skepticism among analysts and GM watchers.

With good reason; they have history on their side. The list of unsuccessful auto mergers stretches from the present day - Daimler (DAI) and Chrysler, BMW and Rover - all the way back to Studebaker-Packard and Nash-Hudson.

Buying Chrysler would only get GM (GM, Fortune 500) more of what it doesn't need: more brands, more models, more factories, more employees, more dealers. You have to wonder what makes GM think it could run Chrysler's operations more successfully than it has run its own. Like a second marriage, a GM/Chrysler merger would be a triumph of hope over experience.

So what's an ailing automotive giant to do?

GM has the wrong products to sell into a shrinking market and can offer little or nothing in the way of financing to its customers.

To remain liquid through next year, it needs to raise $10 billion to $15 billion through a combination of internal measures, borrowing and asset sales. That's next to impossible these days. With some of its bonds selling for less than 50 cents on the dollar, the cost of new debt would be prohibitive. Not even vulture investors are clamoring to buy shuttered parts or assembly plants. And Hummer, which GM is trying to shed, does not appear to be the next iconic American brand. Harley-Davidson it isn't.

So how about a government bailout? What's good for GM is good for the country, and vice versa. The federal government has promised more than $1 trillion to keep banks, insurance companies and other financial institutions afloat. Couldn't it find another $100 billion or so to invest in the Detroit Three on top of the $25 billion in loans already approved?

A government loan wouldn't be about protecting well-compensated union jobs or keeping afloat inefficient suppliers in Michigan and Ohio. It could be directed toward advancing Detroit's and the country's strategic interests by speeding development of alternative fuel technologies that reduce our dependence on foreign oil as well as help limit the generation of greenhouse gases.

GM may have a decent shot at that in a Democratic administration. If not, there is bankruptcy. That's a horrible possibility, to be sure, and one that GM claims is not an option because it would destroy consumer confidence in its vehicles. Who is going to accept a three-year warrantee on a new car from a bankrupt company?

But hear me out. Bankruptcy would give GM a chance to negotiate further cost reductions with its union workers, work out its obligations with those suppliers that are still solvent, and help speed the rationalization of its dealer body.

Would GM then be stigmatized as the only bankrupt auto company? No way. Ford (F, Fortune 500) and Chrysler would immediately find that they have been made uncompetitive by GM's actions and quickly follow it into Chapter 11.

Flying one bankrupt airline felt a little awkward, but by the time half a dozen were in the same condition, it seemed perfectly natural. That would apply to the Detroit Three. There is still an appetite out there in America's heartland for Detroit iron, and in the end bankruptcy may be the best way to continue to satisfy it.