Is Skype on sale at eBay? 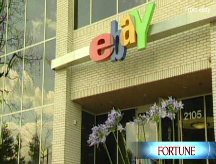 (Fortune magazine) -- In its mere five years of existence the word "Skype" has taken on an unusual dual meaning in the Internet world - known equally as a stunningly successful example of consumer adoption and a dealmaking flop of multibillion-dollar proportions.

On one hand, Skype is a startup with more than 300 million users, many of whom actually pay for the phone calls they place across the globe using a computer and Skype's free software.

On the other, Skype can't shake its rap as Meg Whitman's folly, the company that in 2005 snookered the former eBay chief executive into paying what ultimately became $3.1 billion for promised "synergies" that never materialized, triggering a write-down of $1.4 billion only two years later.

Both takes on Skype are true. Despite its tumultuous three years as a ward of the faltering eBay (EBAY, Fortune 500), Skype continues to grow at a far faster rate than eBay.com, which is being socked by competition and a slowing economy.

Skype is even profitable - it's earning about $100 million in "direct contributions" (corporate jargon for cash flow) on $600 million or so in annualized revenue. That's a huge improvement over the $7 million in total revenue it recorded in 2004, the year before eBay's purchase. Josh Silverman, Skype's current president - the company's fourth since the eBay purchase - defines his mission grandly: "Building out communication software that works anywhere on any device."

The surprising thing is how well Skype is progressing even as eBay is evaluating whether to get rid of it. eBay's new CEO, John Donahoe, who replaced Whitman in March 2008, has publicly suggested he'll sell Skype if he can. Meanwhile, this fall Donahoe has spent more than $1 billion on acquisitions and has announced layoffs of 1,600 workers.

Skype began its corporate life as a renegade. Its engineers were in Estonia, operations were in London, and its legal headquarters were in the tax haven of Luxembourg. Its founders, Niklas Zennstrom and Janus Friis, had previously started the music file-sharing service Kazaa, which famously drew the ire (and lawsuits) of the U.S. music industry.

They started Skype using similar technology but without the piracy problems. Still, when Whitman approached Zennstrom, Skype's CEO, about buying his company, their face-to-face talks had to take place outside the U.S. so that Zennstrom wouldn't be served with a subpoena. (He and Friis have since settled their spat with the record labels.)

The first sign that Skype might be trouble for eBay was the 78-page presentation it put together in September 2005 to explain the deal to investors. Whitman strained to suggest that Skype would make it easier for eBay buyers and sellers to communicate with one another. She also theorized that Skype, which was popular outside the U.S., would increase eBay's international presence. Left unsaid was the actual reason for the huge pricetag: eBay had prevailed in a bidding war for Skype against News Corp. (NWS, Fortune 500) and Google (GOOG, Fortune 500).

eBay had reason to think it could make the Skype deal work, given the success of its $1.5 billion acquisition in 2002 of the payment service PayPal. But PayPal was an obvious fit for eBay, and the terms of its deal didn't include a provision for its founders to earn part of the price by hitting certain targets.

By comparison, eBay agreed to pay $2.6 billion in cash and stock for Skype, plus an additional $1.5 billion pegged to three performance metrics: revenues, gross profits, and users. With Zennstrom remaining as CEO, his incentive was to do whatever it took to make money short term - not always the best strategy for tech startups, which often need product development as much as profits.

Three senior eBay people took turns as Skype president under Zennstrom: former CFO Rajiv Dutta, marketing executive Alex Kazim, and eBay's former PR chief, Henry Gomez - even as Zennstrom and Friis began working on their next project, the online video company Joost. In late 2007, four months before stepping down as CEO, Whitman decided to pay the duo and other shareholders $530 million to terminate their incentive fee and leave the company. Silverman took over last March.

Having been on the job for half a year, Silverman is trying to change the perception of Skype as merely an eBay misstep. "As five-year-old companies go, this is in the upper echelons of success," says Silverman, noting the company's 51% revenue growth. "We give away something that costs us nothing. In exchange we get lots of customers for free and offer them a paid service."

The payments come primarily from users who complete calls from their computers to the telephones of non-Skype users. Calls between two Skype users are free and constitute the overwhelming majority of Skype traffic. The 338 million users as of midyear are a powerful base on which to build, even if most aren't paying Skype a dime.