Are stocks cheap yet?

It's been a brutal selloff, and blue chips have been burned. By some measures, it's a good time to buy. 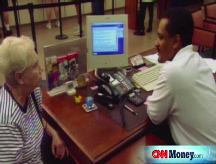 NEW YORK (Fortune) -- Has the brutal market selloff left stocks in the bargain bin? After three painful weeks on Wall Street - and another 9% plunge in the S&P 500 Wednesday, the steepest one-day selloff since 1987 - the stock market is hovering around five-year lows. Including Wednesday's drop, the S&P 500 is off 38% since the start of this year, while the Dow Jones Industrial Average has plummeted 35%.

So are stocks downright cheap yet? By many measures, they certainly appear that way. Analysts at research firm Morningstar calculate a "fair value" for each of the approximately 2000 stocks they track. On average, those stocks now trade at about 72% of that fair value estimate, after hitting a low of 64% on October 10. That's as low as the figure has gone since Morningstar began tracking it in 2001. The research firm has more five-star-rated stocks now than ever before, says Robert Johnson, Morningstar's associate director of economic analysis.

The broad stock market now trades at 11 times the past 12 months' operating earnings, says Sam Stovall, chief investment strategist at Standard & Poor's Equity Research. That's a 44% discount to the average multiple since 1988, Stovall notes. "If you expect no earnings growth at all, we're still trading at a very hefty earnings discount," he says.

Another measure of valuations also suggests that stocks are extraordinarily cheap right now. By using a ratio of price-to-peak earnings (essentially, the highest earnings posted during the current economic cycle), money manager John Hussman and others seek to more accurately forecast market conditions by filtering out some of the noise and volatility inherent to quarterly earnings.

As Hussman pointed out in a recent note to investors, the S&P 500 is trading for about 10.7 times its peak earnings levels, a multiple as low as we've seen in nearly two decades. (The bear markets of the early 1970s and 1980s saw price-to-peak earnings multiples around seven, but the price to peak earnings multiple historically averages around 14.) "Stocks are now at the same valuations that existed at the 1990 bear market low," Hussman wrote. "Relative to 30-year Treasury yields, the S&P 500 is priced to deliver the highest excess return since the early 1980's."

That hasn't been enough to lure hordes of bargain hunters back just yet, and investor psychology may be largely to blame. The market tumble may have been the result of the frightening uncertainty over the full scope of the credit crisis and the federal bailout plan. But a related concern is now also preoccupying many investors: Just how long and deep will the recession be, and how much will corporate earnings suffer? "Everybody's now suddenly waking up," says Morningstar's Johnson - and dealing with the notion that, "Oh shoot, we've got a recession to go through yet." That's why Wednesday's troubling retail-spending report prompted such a sharp decline.

The lingering economic uncertainty and the cloudy picture for earnings make it extremely difficult for investors large and small to gauge just how cheap stocks have become. The worry now is that, if the economic crisis drags on and earnings expectations for the fourth quarter and the year ahead prove too optimistic, today's screaming bargains may not be such great deals after all.