Investor Daily: Giants aren't as cheap as they appear. The pros, meanwhile, are hunting for bargains among smaller fry. 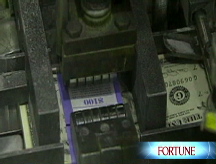 NEW YORK (Fortune) -- The worst of the market downdraft may be over, the convulsing may be easing up and a few brave investors - most notably Warren Buffett - are scooping up bargains.

If the whole modus operandi of investing is to buy low and sell high, then this would seem like the perfect time to do the former.

And if so, what group has been more beaten down than banks and other financial companies?

But before you take out a margin loan to buy these stocks (yikes!), you need to take heed of this simple advice: Be very, very careful.

Yes, it's true that Buffett bought pieces of Goldman Sachs (GS, Fortune 500) and GE (GE, Fortune 500) (which gets more than 40% of its profits from its finance subsidiary), but remember he did it on terms that are unavailable to the rest of us, through a series of preferred stock yielding 10%.

The banking giant has racked up billions of dollars of losses this year, so the price of its stock relative to earnings (yep, the ol' P/E ratio) is more guesswork than anything else. For the year analysts are predicting a loss of $1.87 per share, and coincidently a gain of $1.87 per share for 2009. How much faith do you have in those numbers?

On the other hand, over at JP Morgan (JPM, Fortune 500) another pitfall lurks. Widely considered to be in better shape than Citi, JPM trades around $39 down from the low $50s. A mark of confidence to be sure, but that means that Morgan's stock trades for 18 times trailing earnings - which is hardly a bargain considering all the questions surrounding the banking biz. It should be noted that other large banks thought to be relatively healthy, i.e., Wells Fargo (WFC, Fortune 500) and Bank of America (BAC, Fortune 500), sport similarly pricey P/Es.

But doesn't the $700 billion federal bailout - part of which is to be invested directly in these financial institutions - mean that risk has been mitigated, making them buys?

Not hardly, says Meredith Whitney, Oppenheimer & Co's Delphic analyst. "The economic train is already off the tracks, so the bailout will not stop that damage," she told me. "Solvency concerns are off the table for now, but earnings weakness is not. Stocks are still very expensive on a real earnings basis."

Dimon: "[W]e are not going to say, 'yahoo this is over, extend credit like we did without fear.' If you are not fearful, you're crazy."

Dimon: "We know you are. We're waiting for you to reverse your position."

What about the folks that make a living buying these stocks, as in portfolio managers of financial stock mutual funds? What do they see? Not a pretty picture. "Armageddon," is how one of them describes it.

That's not surprising. According to Morningstar this group of funds is down 38% year to date, with a good many off 50% and even 60%.

There are a few one-eyed men though, like David Ellison, who runs FBR Small Cap Financial, the top performer in the group, off only 6% this year. Ellison has cut his exposure to stocks; some 26% of his portfolio has been in cash.

And he owns stocks you've probably never heard of. Like Hudson City Bancorp (HCBK), up 17% this year. And TCF Financial (TCB), up 3% year to date. And Bank Mutual (BKMU), which has climbed 11%.

Though these are among Ellison's most recent largest holdings, he is quick to warn, "those are the ones that [could be] down next week."

Still he says he is "trying to buy the simplest balance sheets and the simplest income statements, where you have companies where you understand the types of loans they're making. You want to own very traditional underwriters that are lending locally and that tends to focus you on the smaller companies."

Hudson, which is based in Paramus, N.J., and was founded in 1868, seems to fit that bill. The AP says that "Hudson City prides itself on never having issued a subprime, option adjustable-rate or Alt-A mortgage."

Hudson isn't exactly small potatoes; it has 136 branches, $44 billion in assets and a market cap of $8.4 billion. Just be advised that this is not a cheap stock either.

Bank Mutual out of Milwaukee is far smaller with only $3.4 billion in assets, while TCF Financial - is that TCB ticker for 'taking care of business'? - based in Wayzata, Minn., was recently cited by Sean Ryan, analyst with Sterne, Agee & Leach, as being a Midwest bank that was likely not vulnerable to further weakness. Hardly a glowing recommendation, but in this environment, that makes TCF stand out.

Remember these banks could all still be hit by the unforeseen, and Ellison warns that non-performing assets are still rising and "when NPAs are rising, you generally don't want to be in the group."

Anton Schutz, who runs the Burnham Financial Services and the Burnham Financial Industries fund, two other top dogs in the group, down 10.4% and 14.7% this year (and remember that's way above average), is playing some of the same notes as Ellison. Schutz has a slug of his money in cash and the rest in no-names such as TFS Financial (TSFL), a mutual holding company which is partially owned by the public and partly owned by depositors.

Here's Schutz's take: "What's really neat here is that they have too much capital. They're buying a lot of their own stock back, and buying well below its fully converted book value. That means if the company were ever to go fully public, every share they buy makes the fully converted book value rise. Beautiful math. I feel very good about their credit quality, their capital ratios and their creation of value for shareholders."

He also likes mortgage REIT American Capital Agency (AGNC). Says Schutz: "What they buy is some of the most, to me, best value in the market today -Fannie, Freddie, and Ginnie mortgage-backed securities. And who's guaranteeing those? The U.S. government."

The market is undervaluing those securities in the current climate of fear, Schutz argues, creating the opportunity for big gains as investors start to regain confidence. In the meantime, says Schutz, American Capital isn't taking much credit risk, "because that paper's all really good paper."

Schutz also owns JP Morgan, but it wasn't the first stock he wanted to talk about.

Last fall after we were several months into the housing crunch, some suggested that home-builder stocks like Lennar, Pulte, Centex and D.R. Horton, which had already seen huge declines and looked cheap relative to earnings estimates, were screaming buys.

And sure enough in the first few months of this year they were super-star stocks, as it looked to some that the housing market had bottomed. Instead the business tanked even further, and now those shares have fallen by another 50%.

The bottom line is that two of the better fund mangers in the banking neck of the woods are for the most part hunting and pecking in the little names and have big chunk of their change in cash. Something to consider if you are inclined to take a flier in financial stocks right now.