Bill Nguyen has reinvented his online music service Lala.com for a third time, hoping a new twist will put him on the top of the charts. 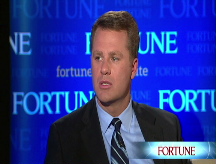 NEW YORK (Fortune) -- In 2005, serial Silicon Valley entrepreneur Bill Nguyen decided to do something wildly ambitious. He raised $9 million in venture funding from Bain Capital and Ignition and founded Lala.com, a startup he vowed would rejuvenate the struggling music industry by letting people swap CDs using prepaid envelopes for $1 a trade.

The idea: LaLa.com users would discover - and buy - more music. At least that was the plan. Lala.com hasn't delivered on its founder's promise and even Nguyen has been humbled by the experience. "There are definite moments [where] it feels like a personal Iraq - lots of impulsive enthusiasm on my part and a ton of setbacks," he concedes.

Nguyen isn't giving up yet. This is the same guy, after all, who has made millions of dollars for himself and his investors by founding companies like ForeFront Group, the first offline broswer, and Freeloader, a pioneer in push technology. More recently, Nguyen created Seven, a mobile email software developer.

On Tuesday, Nguyen's digital music venture unveiled a new service that puts it in direct competition with Apple's (AAPL, Fortune 500) iTunes Music Store, the country's largest music retailer. The new service allows LaLa users to stream any song in its catalog of six million tunes once for free. If they like a song enough to buy it, they can purchase a permanent streaming copy for 10 cents or download it for an additional 79 cents.

In short, Nguyen is trying to make it easier for Lala.com's customers to sample music and cheaper for them to buy it than at the Apple store where they only get to listen to a 30-second clip before purchasing a song for a 99 cents.

Lala.com users will also be able to access their digital music collections from any computer with a web browser.

The company's software will simply match songs from their personal MP3 libraries and make them available from its own catalog at Lala.com. Customers will also be able to add songs remotely to their collections.Of course, LaLa.com can't guarantee that its library will contain all the songs in its users' collections.

The new place for music

LaLa.com CEO Geoff Ralston foresees a time in the not-so-distant future when most people will listen to music through their browser rather than downloaded software programs like iTunes that sit on a designated hard drive.

"The web is going to be the place where people consume music," Ralston says.

LaLa.com was originally launched as a site that people visited to buy new CDs or swap their old ones with other music fans. It quickly attracted 300,000 users

In June 2007, however, the company rolled out one of the first free, streaming music services. But it was only able to score a deal with one of the Big Four record labels, Warner Music Group (WMG). Lala.com discontinued the feature a mere six weeks later.

Nguyen hopes to more successful this time and keep Lala.com from being shoved aside by newer competitors like Amazon (AMZN, Fortune 500), imeem and MySpace Music (NWS, Fortune 500).

Once again, Lala.com's ebullient founder has set the bar awfully high. But this time, Lala.com has the support of all four major record companies - and as Nguyen repeatedly notes - 70,000 independent labels.

"It's certainly a very exciting offering," says Sonal Gandhi, an analyst at Forrester Research. "It's quite different from anything else that's out there on the market."

Of course, Nguyen made similar grandiose predictions last June when he tried to launch the failed streaming service. Now he is trying to regain his credibility at a time when competitors like imeem and MySpace Music are attracting numerous users with their own ad-supported free music services.

"I loved their original 'swap used CDs' business," says Eric Garland, CEO of Big Champagne, a digital entertainment analytics company. "Actually, I still use it, received a CD in the mail last night, in fact. Since that time, they have been casting about for a business model."

Nguyen concedes that "imeem and MySpace obviously beat us to the punch." But he says Lala.com's new service will be better for its customers and the industry he wants to help. He criticizes imeem and MySpace Music for cluttering their site with so many ads. He says Lala.com won't do that because he thinks it will turn off users.

So how will his company pay the record labels for all the free music its customers sample? After all, they need to be paid everytime someone streams a song online.

Gandhi also questions how Lala.com can make money by selling customers the right to permanently stream a song for a mere 10 cents. "It's almost too good to be true," she says.

Lala.com argues it can cover the costs entirely through music sales, though that sounds farfetched.

But the company claims it can break even if its customers buy 30 to 40 songs for every 1,000 that they stream. According to Lala.com, its beta users are already buying 120 songs per thousand.

Shazam comes out of the shadows
Related Articles