A refrigeration breakthrough from the popular ice cream maker could change the business of cooling. 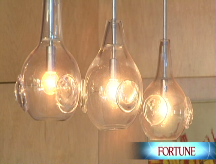 (Fortune) -- No one wants melting ice cream. Nor do we want melting polar ice caps. The trouble is, keeping our ice cream cold warms the planet because powerful greenhouse gases are used in most refrigerators and freezers in the U.S.

That's why environmentalists at Greenpeace have been working with some of the world's biggest food makers - among them Coca-Cola (KO, Fortune 500), McDonald's (MCD, Fortune 500) and Unilever - to deploy refrigerators in supermarkets and convenience stores that are free of hydrofluorocarbons (HFCs), which are potent greenhouse gases.

"A company can be responsible in terms of the environment, it can be proactive in terms of solving problems, and it can make money at the same time," said company co-founder Ben Cohen when he introduced the freezers at an ice-cream store in Washington, D.C. "That's what we should expect from all corporations in this country."

The new freezers are a rare example of a global warming solution that actually saves money. They cost about the same as conventional refrigerators - the price depends on the size - and are 10% more efficient, meaning they use less electricity. So far, more than 300 million HFC-free freezers, which use hydrocarbons like propane and butane as refrigerants, have been sold in Europe, Asia and Latin America, but not the United States.

Why is that? The answer, surprisingly, lies with the Environmental Protection Agency.

First a fix, then a new problem

Bear with me, because this gets complicated. It's an example of how an attempt to solve one environmental problem can exacerbate another, and how bureaucracies can (no surprise) stand in the way of change.

You may recall a mostly-forgotten environmental problem that goes back to the 1980s and was often described as the hole in the ozone layer. In 1995, a global treaty called the Montreal Protocol banned chemicals known as CFCs (chlorofluorocarbons) after scientists learned that CFCs depleted the ozone layer of the atmosphere, which shields life from the sun's harmful radiation.

Instead of using CFCs, the refrigeration industry turned to so-called F-gases - HCFCs and HFCs - which did less damage to the ozone layer but contributed to global warming.

Greenpeace blames F-gases for about 16% of man-made global warming; the chemical industry, which makes the gases, says it's much less. It depends on what you're measuring, but big users of refrigerants like Nestle, one of the world's biggest food companies, have committed to phasing out HFCS.

Refrigerators, it turns out, are big polluters. Greenhouse gases are emitted during the manufacturing process, when air conditioning fluid leaks, and when refrigerators are disposed of improperly.

Greenpeace has been working on climate-friendly refrigeration since the 1990s, when it persuaded a German manufacturer to make refrigerators cooled by hydrocarbons. Since then, Whirlpool (WHR, Fortune 500), Bosch, Panasonic, LG, Miele and Siemens (SI) have all developed HFC-free refrigerators - or what they like to call "natural refrigerants."

In 2004, Unilever, Coca-Cola and McDonald's formed a coalition called "Refrigerants Naturally!" to develop HFC-free vending machines, coolers and display cases. Carlsberg, Ikea and PepsiCo (PEP, Fortune 500) have signed onto to the initiative. (Yes, PepsiCo and Coca-Cola, fierce rivals in the beverage business, are cooperating to solve this environmental problem.)

Some of the technology they are developing is quite sophisticated. Coca-Cola, for instance, has deployed "smart" vending machines that learn how to cool drinks only at times when customers want them. Those in office buildings, for instance, power down over night, saving electricity and reducing emissions.

For its part, Unilever says it has deployed more than 300,000 climate-friendly refrigerators overseas.

But U.S.-based companies like Ben & Jerry's that want to deploy so-called natural refrigerants have been stymied, until now, by the EPA. The agency says on its Web site that refrigerants made from hydrocarbons like propane and butane are flammable and therefore unsuited for use in anything other than industrial applications.

Only after considerable efforts did Ben & Jerry's get EPA permission to install its hydrocarbon-based freezers, which use butane, in the United States. The EPA said Ben & Jerry's can test up to 2,000 freezers.

If the EPA allows the test to expand, Ben & Jerry's estimates it could convert more than 100,000 ice cream cabinets in eight to 10 years. "If we get approval from EPA, we will roll them out in large numbers," said Allen Gerard, a Unilever engineer who has been working on the effort. Greenpeace hopes the trial run will open the door to wider use in the United States of so-called natural refrigerants.

Said the group's research director, Kert Davies: "The great thing is, we've got some momentum now."