Greenberg fights for a sweeter deal

The former AIG chief is pushing for new terms on the government's massive rescue package. 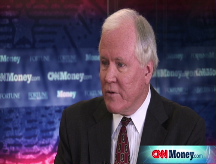 NEW YORK (Fortune) -- The battered shareholders of AIG refuse to go quietly into the gentle night, lobbying both regulators and the company to amend last month's multi-billion dollar rescue package.

On Thursday, Maurice "Hank" Greenberg, AIG's former leader and major shareholder, sent a letter to current chief executive Edward Liddy, imploring him to speak up publicly about the importance of amending the rescue agreement.

That deal provided an $85 billion loan to the troubled insurer at a punitive interest rate, and the government has since extended an additional $38 billion in credit.

The plan was to give AIG breathing room to sell off parts of its business in an orderly fashion. But, Greenberg maintains, the high-cost loan is placing a crushing burden on the company, hurting its ability to run it core insurance operations.

"The current Federal government loan to AIG is effectively nationalizing the company," Greenberg wrote in the letter, a copy of which was obtained by Fortune. "The value of AIG's assets are declining daily. Employees are leaving and renewals are down."

Other shareholders have raised similar concerns.

Last month, a group of investors claiming to represent more than 30% of the pre-collapse equity of AIG hired Mayer Brown partner Mickey Kantor to lobby the Treasury Department and other regulators to revise the rescue terms.

Also monitoring the discussions has been New York State Comptroller Thomas P. DiNapoli, whose pension funds have taken a $1.2 billion blow because AIG's near collapse.

In the letter on Thursday, Greenberg, who has lost hundreds of millions of dollars as AIG plunged, calls for terms similar to those extended to banks and brokerages as part of the Troubled Asset Relief Program.

The former AIG chief is asking that his old company be granted access to the sharply lower cost capital of the Federal Reserve's discount window, a borrowing facility that had long been available only to banks for short-term loans but which has been "opened up" in this crisis to investment banks.

The attractiveness of this option to AIG is obvious: the company could borrow at 1.25%, well below the rate on the government loan, which currently runs upwards of 12%.

Greenberg also proposed that the outstanding balance of the government's loan be converted into a dividend-paying preferred stock, which he argued would stop the need to sell billions of dollars worth of otherwise profitable assets "at fire sale prices" to pay back the loan.

In a move that could help somewhat, on Thursday AIG announced it was using the Federal government's new commercial-paper program to borrow at cheaper rates - less than 4%.

Greenberg and the other investors maintain that AIG is being forced into a de-facto run-off mode, where it loses key employees and cannot win the new business that allows cash premiums to flow in and sustain operations.

In turn, the company is then forced to try and sell assets (like its aircraft financing unit) at distressed prices into a market where potential buyers likely can't get financing.

The upshot is an almost guaranteed implosion where, so the reasoning goes, the taxpayer is on the hook for at least $84 billion of AIG's borrowing so far.

Borrowing cash from a Treasury-funded facility at double-digit interest rates, AIG is essentially draining the company of its operating cash flow to make interest payments on cash it doesn't even keep, said one person familiar with the Kantor lobbying effort.

Indeed, according to the individual close to the Kantor discussions, over $50 billion of AIG's borrowings under the government facility are sitting in an account at Citibank.

These funds are reserved against potential future losses on the company's now nearly fatal bet that real-estate laden collateralized debt obligations would not collapse in value. These bets were made using something called a credit default swap, which acts as an insurance policy should pieces of the CDO drop sharply in value.

Arguing that the 8,500 AIG employees in the State of New York, and the $900 million of tax revenue they bring to the state's coffers, stand to have their jobs and company investments wiped out under the current plan, Greenberg suggested that the only parties anxious to see the current plan remain in place are the swap holders.