A tour through the software stalwart's brand-new temple of industrial design. 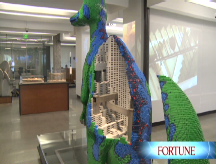 (Fortune Magazine) -- When is a lobby more than just a lobby? When its owner spends $10 million to turn it into an awesome how-things-are-made museum.

That's what Autodesk (ADSK), based in San Rafael, Calif., did when it came time to remodel a 16,500-square-foot briefing center in downtown San Francisco. The Autodesk Gallery, as the space is called, showcases the wares of the company's customers - from Ford (F, Fortune 500) and Chrysler to LEGO and the California Department of Transportation.

Autodesk is best known as the $2 billion (2007 revenues) publisher of AutoCAD software, the starting point for any architect thinking about a new project, whether it be the average strip mall or the Bird's Nest in Beijing. But the company's reach extends far beyond buildings, and even beyond the physical world into games and movies. "Everything out there that's not natural, one of our customers made," says CEO Carl Bass.

Put that way, it sounds like hyperbole, and so rather than merely talk about Autodesk's scope, Bass decided to build a showcase that would simultaneously impress and inspire clients. Unveiled this autumn, the space will also play host to design-industry events and is even open to the public one day a month. "The big idea is to show off the work of our customers as a way to explain design, engineering, and art to people," Bass continues. "It's a bit like when you ask kids, 'Where does food come from?' and they say, 'Supermarkets.' Most people don't realize that people make real decisions about size, color, and proportions. We wanted to spotlight good design but also focus on the process."

A big part of Autodesk's marketing efforts is the importance of being green, and so Bass decided the museum should not just feature cutting-edge design but should also hew to the highest standards for energy efficiency. The company primarily used local timbers and materials. Rather than replacing old concrete floors with something flashier, Bass polished them into postindustrial coolness. The process surprised him. The space is in a historic building at 1 Market Street, overlooking San Francisco Bay, so just installing bike racks involved negotiations. "Almost everything was a tradeoff," he says. "But we have to walk the talk. Ecologically sensitive design is important. It's good for us to take some of our own medicine."

About 18 months into the project, Bass named a curator for his museum and gave him a directive: Mix it up. The two dozen exhibits include a motion-capture studio like the one James Cameron is using to shoot his next film, Avatar; a 62,000-brick Lego dinosaur; scale models of the under-construction span of the Bay Bridge; and a Ford Mustang Shelby GT 500 concept car, which had to be crane-lifted through a second-story window. Visitors are encouraged to touch and interact with exhibits and to view videos and tutorials.

Once the showroom started to take shape, clients immediately began, well, lobbying for space. Audi execs saw the Shelby GT and insisted on donating their own supercar, the R8. So Autodesk decided to churn the exhibitions every six months. "If it becomes about bragging rights to get in here, I think that's great," says Bass.

How does he plan to measure the ROI on a $10 million lobby? If he can inspire clients, he'll sell more software. But he also hopes to simply raise Autodesk's profile. "Despite our footprint in digital tools, we haven't been the center of the art and design community here," he says. "We've been somewhat invisible, and we want to be central to the conversation."

Big tech: A shelter in the storm
Related Articles