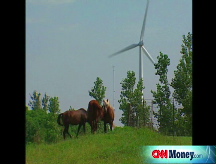 (Fortune) -- Some people are saying that the clean energy revolution is over, before it has even begun. "Alternative energy suddenly faces headwinds," declared The New York Times. "Winds shift for renewable energy as oil price sinks, money gets tight," reports The Wall Street Journal. "Will the Economic Crash Take Down Our Hopes for Clean Energy?" asks Alternet.

There's no doubt that recent developments cast a cloud over the renewable energy business. The capital markets have turned risk-averse, making financing for alternative energy hard to come by. Declining oil prices make it harder for cleaner transportation fuels to compete with gasoline. In a slumping economy, the government will be reluctant to pass climate change legislation that will raise gas and electricity rates.

Never mind - there are compelling reasons, even now, to believe that the U.S. is on the verge of a dramatic shift, away from a economy dependent on cheap fossil fuels and towards cleaner, greener, more efficient ways of doing business.

Recently, I spoke with three leading venture capitalists who focus on clean tech: William E. "Wilber" James of Rockport Capital, Alan Salzman of VantagePoint Venture Partners, and Paul Maeder of Highland Capital Partners. Needless to say, they are biased - they are invested, personally and professionally, in renewable energy and other clean technologies.

But they all see powerful forces driving the U.S. economy towards a more sustainable way of doing business in the long run. Those drivers include the science of climate change, rising global demand for a limited supply of fossil fuels, and growing political support for clean energy.

"The fundamentals are there, and they're not going away," says Wilber James, managing general partner of Rockport, the first venture fund to specialize in clean technology. Rockport's portfolio companies include Solyndra, a solar photovoltaic company that claims to offer a breakthrough technology, and Think Global, a Norwegian firm that manufactures a two-seat electric car.

James acknowledges short-term obstacles. Think Global, for example, has slowed its rollout of electric cars in the U.S. because of the economic downturn. He has urged other Rockport-funded companies to pare their spending because so little new capital is available right now. Energy businesses - particularly utility-scale solar and wind companies-require lots of capital.

But, he notes, the federal financial rescue bill enacted into law last month includes tax credits for solar, wind, geothermal and fuel cell companies: "That'll be a shot in the arm for our renewable energy businesses." Solyndra, for instance, has sold more than $1 billion of its solar energy systems but nearly all to European customers. The favorable tax treatment should open up the U.S. market.

Salzman is another experienced VC - he is CEO of VantagePoint, and has been a successful venture investor for 20 years - who says that long-term trends all favor clean energy. VantagePoint's investments include BrightSource Energy, which builds utility-scale solar thermal power plants, and Better Place, which has a bold plan to build a global infrastructure for electric cars.

"The world is industrializing, and with that comes a great demand for all natural resources - clean water, energy and materials," Salzman says. "A billion and a half people have no electricity. Do we really think that's going to continue?"

As for the shortage of capital that threatens some startups, Salzman says: "Any addition to energy capacity takes capital. If you're going to put an offshore drilling rig on the continental shelf, that's expensive. If you are building a nuclear plant, your costs are in the billions. It's really a question of the choices that we as a society make."

Politics will be key factor. Here, Salzman and others argue that Congress and the new president will support policies to promote clean energy for host of reasons -to create so-called "green jobs" and stimulate the economy, to help the U.S. become more energy independent and to promote national security. "We're shipping huge amounts of dollars overseas for something we literally put a match to," says Salzman.

Maeder is a relative newcomer to energy investment, although Highland, which he co-founded, has invested in information technology, digital media and health care firms for 20 years. Aside from a money-making investment in a geothermal company several years ago, Highland avoided clean energy investments until now because Bush administration policies were unfriendly to clean tech, according to Maeder.

Now, he says: "We'll have a new administration that will very likely lead to a complete about-face in our government's approach to energy and the environment."

Maeder says that energy prices will continue to fluctuate but that demand has grown steadily by 2-3 percent a year and will continue to do so. Nevertheless, Highland does not expect to invest in capital-intensive energy projects; instead, it will look for opportunities in energy efficiency and demand management, which will be good businesses, regardless of the price of oil.

"The design assumption for most of our world is that energy and water are free, and information is expensive," Maeder says. In fact, the opposite is true - energy is costly and information is cheap, so he will look for ways to marry software and connectivity to the energy business.

An idea as simple as a thermostat that displays the cost of electricity per hour has been shown to drive down usage significantly. "I want to be on the demand side," Maeder says.