Deep global rate cuts show that policymakers fear a drop in price levels, regardless of their brave words. 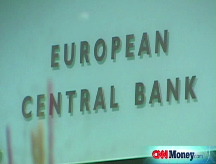 NEW YORK (Fortune) -- Forget about inflation. The opposite threat - deflation - is what has policymakers sweating now.

Central banks across Europe slashed interest rates again Thursday. The Bank of England cut its policy rate to 3% from 4.5% - a cut three times as big as the market expected - while the European Central Bank trimmed its own rate by half a point, to 3.25%. The moves come a week after the Federal Reserve cut the Fed funds rate to 1%, touching the lows it set earlier this decade before the housing bubble took shape.

The cuts are remarkable because it was only four months ago that the ECB was raising interest rates to stem inflation fears tied to the surging prices of energy and food.

But since then, the deleveraging that has upended the financial sector has accelerated, and economic activity has slowed sharply. Policymakers have changed their tune accordingly, saying falling commodity prices will ease pressures for wage increases and support broad price stability.

The rate cuts are so severe, though, they suggest that the issue isn't the absence of fear about inflation. Rather, it's that bankers are worried that the destruction of trillions of dollars of wealth in the collapse of the housing and stock markets will stem demand for goods of all sorts, creating the kind of falling price environment not seen here since the 1930s.

Among central bankers, there is "a real sense of concern about falling inflation," says Lena Komileva, an economist at interdealer broker Tullett Prebon in London. She says that concern is reflected in the aggressive rate cuts seen around the globe of late.

Many economists say there's no reason well-managed modern economies should ever have to fret over the prospect of deflation - a drop in the money supply that, by making cash more valuable and lowering prices, slows economic activity and increases the debt burden on people and companies. As Fed chief Ben Bernanke infamously noted in a 2002 speech, a government pushed to the brink has a surefire remedy for falling prices: the printing press.

But the events of the past year have made clear that the mere threat of cranking out more currency isn't enough to restore debt-engulfed economies to equilibrium.

The Fed began cutting interest rates 15 months ago, and soon after started rolling out policies aimed at providing liquidity to cash-strapped players in the financial system. Other central banks hastily joined in the march to monetary expansion in September, when the collapse of Lehman Brothers led to the near collapse or partial nationalization of the global financial system.

Since then, officials have piled on all sorts of programs - backstops for money market funds, guarantees for bank deposits, swap lines for borrowers in foreign currencies - in a bid to support financial institutions and unlock frozen credit markets.

Komileva says governments in the U.S. and Europe, after initially ignoring structural problems in the financial markets, have embarked on "a super-expansionary policy" in which government purchases aim to prop up flagging private-sector demand.

But just as the Fed's interest rate cuts couldn't keep an overleveraged domestic economy from heading into its first recession in seven years, there is the suspicion that massive injections of liquidity won't be enough to avert a steep decline in global demand.

The problem, Komileva says, is a glut of productive capacity that came online worldwide during the credit boom earlier this decade. Now that credit is increasingly unavailable, demand for goods stands to fall substantially below the available supply - a mismatch painfully visible in the U.S. auto industry, for instance, where sales fell 32% from a year ago in October to their lowest level in more than two decades.

Of course, the deflation thesis has no shortage of doubters, both in official circles and among economists.

"What matters, if we are going to worry about it, is if we have sustained deflation," International Monetary Fund chief economist Olivier Blanchard said Thursday. "At this stage, this is something that we should worry about. But we think that the probability of such a sustained deflation is, for the moment, very small."

He wrote a paper in 2003 pointing out that only two of 44 stock or real estate bubbles led to deflation going by the consumer price index, and that only two of 18 deflationary episodes in advanced economies were preceded or accompanied by asset-price busts. He also notes that interest rates on long-dated government bonds and inflation-protected Treasury securities show that inflation expectations remain positive, which likely wouldn't be the case if investors expected to see deflation ahead.

Still, it's worth recalling that optimists have been wrong before about this crisis. After all, a year ago at this time the short-term interest rates targeted by the Fed, ECB and Bank of England were at 4% or above, and the so-called decoupling thesis - the notion that the U.S. could have a recession without the rest of the world being affected - was alive and well.

Komileva notes that trading one- and two-year U.S. inflation swaps show investors perceive a real threat of deflation. One-year swaps, for instance, currently show inflation at minus 1.9%, she says.

"Just as the real economy was 'recessionary' a year ago before GDP turned negative, the pricing backdrop is 'deflationary' today even though consumer prices have yet to deflate on a year-over-year basis," Merrill Lynch economist David Rosenberg wrote last week. The U.S., he adds, has "a credit contraction of historical proportions on our hands."