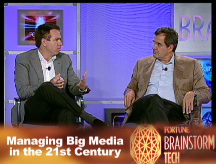 LOS ANGELES (Fortune) -- For America's media conglomerates, it's getting Darwinian out there - and the next stage of their evolution could come quickly.

This week, the three biggest media companies by revenue - Walt Disney (DIS, Fortune 500), Time Warner (TWX, Fortune 500) and News Corp. (NWS, Fortune 500) - released news with their earnings that to varying degrees reflected the bleak economic outlook. And the stocks of all three are trading at levels slightly less than they were a decade ago.

On their earnings conference calls, execs seemed to be reading from the same downbeat script featuring warnings of potential layoffs, cost-cutting, lowered expectations and a general battening down of the hatches. But there's another (possibly more optimistic) storyline developing, too: The companies - as they say in Hollywood - are "re-imagining" themselves for a happier future when they can show they're growing and adapting to changing technologies. Whether the drama plays out that way is, of course, far from a sure thing. But here's how the Big Three are positioning themselves:

At News Corp., which owns the Fox TV and film businesses, MySpace, newspapers, book publishers, and much else around the world, the company warned that it expected operating income to be down by as much as 15% for the year ahead. Chairman and CEO Rupert Murdoch spoke Wednesday of a "prolonged economic slump" that will affect everything from advertising sales to DVD purchases.

Yet, to the puzzlement of analysts, he also said that despite his company's battered share price - it's off 64% in the past year - he doesn't expect to buy back more stock. Rather, at his company's annual meeting last month, Murdoch spoke of a $5 billion "war chest" to do what he likes to do best: buy things and shakes industries up. (His last $5 billion deal went toward buying The Wall Street Journal and its parent Dow Jones last year.). This posture has led to investor worries that Murdoch will be going out on a limb and making some kind of wild bet, but Murdoch has been hearing and ignoring concerns like these for a half century or so. (Disclosure: some of my columns run in the Times of London, which is owned by News.)

At Time Warner, the company's operating earnings were relatively flat and its full-year outlook was lowered a bit due to one-time charges related to a restructuring at Time Inc., which owns Fortune. But the real story for Time Warner (which also owns CNNmoney.com) is what the contours of the company will be going forward. In weeks ahead, the company is expected to complete the spin-off of Time Warner Cable, a move which will focus Time Warner much more clearly as a pure content play with such brands as Warner Brothers, HBO and the Turner cable networks at its core.

To finish that job, CEO Jeffrey Bewkes also needs to shed star-crossed AOL from the company's portfolio and psyche, something he declined to give specifics on this week. The news that Google walked away from its alliance with Yahoo (YHOO, Fortune 500) - AOL's most logical and rumbled-about merger partner - can only lead one to surmise that Bewkes has given his office, home and weekend numbers to Yahoo CEO Jerry Yang. Eventually, with AOL resolved and a planned $9.25 billion transfer payment coming from Time Warner Cable as part of its separation, Bewkes is expected to go shopping.

At Disney, results showed little direct evidence of the downturn, though CEO Robert Iger spoke on a conference call of softness in both bookings for the theme parks in the first half of 2009 and an advertising slowdown at the ABC TV network and its cable channels. (The company also took a charge for a $91-million bad debt stemming from the failure of Lehman Brothers ) But he also allowed that amid a range of cost-saving initiatives, the company's balance sheet is strong and it is keeping an eye out for "opportunistic" acquisitions.

Disney has acquired some small gaming companies--and among the big three is the company that made the biggest acquisition in dollar terms of the group in the past three years when it paid $7 billion for Pixar.

And News Corp., well, one really doesn't know where Murdoch may head next.

Meanwhile, one would expect a lot of eyes to be on parts of Viacom (VIA) (which owns MTV and Nickelodeon and the Paramount studio) after controlling shareholder Sumner Redstone was recently forced to sell some of his non-voting shares in it and CBS. (Redstone insists he won't be selling any more shares.)

In the midst of what looks like a nasty recession, shopping sprees hardly seem the order of the day. But size confers certain advantages in rough environments, and the Big Three will be anxious to prove they're continuing to evolve - and aren't headed the way of the brontosaurus.