GM said Detroit would go under unless it could buy Chrysler. Then it had second thoughts.

How far the mighty have fallen 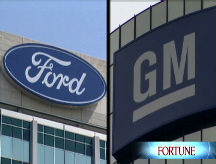 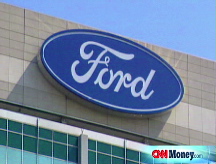 NEW YORK (Fortune) -- These are strange and horrible times for Detroit, even by the standards we've become accustomed to, as the Detroit Three (formerly Big Three) automakers continue to waste away. In the latest twist, General Motors, one of the Three, had been saying privately that Detroit would collapse unless Washington gave it billions to help it buy Chrysler, the smallest of the Three. But then GM put the deal, supposedly so vital to the future of Detroit, on hold. If you look at the numbers, you can see why.

The pitch was that unless GM (GM, Fortune 500) got to buy Chrysler, the jobs of their combined 145,000 U.S. workers and the futures of their 682,000 retirees and spouses were at risk. What's more, the jobs of millions more workers and retirees at firms that supply goods and services to the U.S. car companies would be at risk too.

Despite the warm-and-fuzzies about saving jobs, GM and Chrysler were really trying to salvage something for their owners - and will probably try again, provided GM can survive the next few months.

GM said Friday it could run out of cash by year-end, absent an improvement in its fortunes. It won't discuss the "b" word, but I think that if it goes into bankruptcy, its shareholders will be wiped out.

Meanwhile, Cerberus, the once-infallible alternative investment shop, has stuck its investors, who own 80.1% of Chrysler, with a holding that the financial markets value at little or nothing. (Cerberus declined to comment.) That's based on the fact that Chrysler's senior bank debt currently trades at less than 50 cents on the dollar and because Chrysler's other owner - Daimler (DAI), formerly DaimlerChrysler - recently revalued its 19.9% Chrysler stake down to zero. (Sure, a minority stake is worth proportionately less than a controlling stake - but zero is a pretty daunting number.)

Let me show you why I think GM, which has been hemorrhaging more than $2 billion of cash a month, decided to deal with its liquidity problems now rather than pin its hopes on buying Chrysler.

The problem, as they say, is that Chrysler's assets are all tied up in debts, and the last thing GM needs is more borrowings on its pathetic balance sheet. Chrysler owns valuable assets, such as its Jeep and minivan businesses. But it also has at least $9 billion of debt - I say "at least" because $9 billion of loans have been publicly identified, but there may be more debts that we don't know about. Cerberus won't disclose Chrysler's balance sheet.

Cerberus, which got its controlling stake in Chrysler two years ago in return for investing $7.4 billion in the company, has shrewdly been trying to salvage something for its investors by whipping up a bidding war (or the illusion of one), pitting GM, Nissan (NSANY), and who knows who else against one another.

Chrysler had $11.7 billion in cash as of June 30, according to an August news release. That's nice. However, the release said, $2.3 billion of that cash was restricted. So the net cash was only $9.4 billion, not much more than Chrysler's publicly identified debt.

As part of the deal, GM was supposed to turn over to Cerberus some or all of its 49% stake in GMAC, its once-highflying finance subsidiary that has fallen on hard times. Adding $19 billion of debt and forking over a presumably valuable holding is a stiff price to pay for 80.1% of an underwater asset.

General Motors' secret sauce was that it was going to deftly fold Chrysler into GM, saving more than $6 billion a year at the combined company, which would have enough staying power to hold on until the auto market revives. The plan looked great on paper - but then again, GM's plans always look great on paper. It's in the real world that the trouble starts.

GM's management has repeatedly proclaimed that turnarounds are at hand, only to have them vanish. Think these folks could successfully integrate two troubled companies and rationalize their product lines? You make the call.

Then there was the financial elephant in the room. No, it's not the GM and Chrysler pension funds. Those funds are in good shape - or at least were before the October market meltdown.

The problem is the cash GM and Chrysler need - and soon - under terms of the grand bargain the Detroit Three made last year with the United Auto Workers about health care for retirees. GM, Ford, Chrysler, and the UAW agreed to have health-care trusts assume responsibility for retiree health care. In return, the companies promised to turn over billions to the trusts. The amount, while huge, was way less than the cost at which those benefits were carried on the companies' books. Capping the retiree-health liability seemed to promise the companies long-term salvation.

But, boy, is there a near-term problem. By my math, GM and Chrysler have promised to give the trusts a total of $12.5 billion to $18.1 billion in cash - maybe more - by early 2010. That's above the $16.8 billion currently in the trusts. (See chart at right.) Good luck coming up with that money, guys. Or trying to get more givebacks from the UAW.

GM and Chrysler would almost certainly stop paying retiree health care if they go into bankruptcy before the end of next year. That would be devastating - and it is a major reason I don't think that bankruptcy would be a good thing.

Despite the fact that the numbers don't seem to work, I expect the deal to revive and for Uncle Sam to come across with subsidized loans. Why? Because holding hostages can be an effective strategy. Which departing Bushie or incoming Obamayan dares to risk letting big parts of America's remaining industrial base collapse on his watch?

But I hope that, in return, the government makes all the parties give up something, the way it did when it guaranteed loans for Chrysler in 1979. The government should make workers and retirees pick up part of the tab, it should get Cerberus to put in additional capital, it should install new management, and it should get most of the stock in "New GM." If taxpayers are expected to help save Detroit and bail out a bunch of private equity guys, we ought to get paid for it.