The financial crisis and vast bailout have compelled Barack Obama to get down to business with an all-star team of CEOs and thinkers. Do they have the answers?

Obama's business brain trust
On the long road to the White House, Barack Obama reached out to a diverse collection of economic thinkers.
View photos
Photos

How Obama should fix the economy
Real people across the country answer the question: How will Obama affect your wallet? And what do you think the new President and Congress needs to do to right the economy - both in the short run and the long term?
View photos
Make money, not war 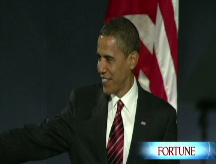 (Fortune Magazine) -- Barack Obama's first job out of college, in 1983, was at the corporate consulting firm Business International Corp. in Manhattan. He started as a researcher but quickly rose to the position of financial writer. He had a Reuters computer screen on his desk, with emerald messages blinking from around the globe. He had his own office and a secretary and wore a suit and tie and carried a briefcase. He wrote about interest rate swaps and met with Japanese financiers and German bond traders.

When he caught his image in the shiny elevator doors, he sometimes imagined himself as a "captain of industry, barking out orders, closing the deal," he writes in his memoir.

Those moments soon passed, overwhelmed by pangs of guilt that he wasn't following the call to be a community organizer, helping poor neighborhoods ravaged by corporate and government neglect. Inside these business trappings, the 22-year-old Columbia University graduate felt like a "spy behind enemy lines."

Obama was still a young man when he described this short episode in his life in Dreams From My Father, but his distrust of corporate America would remain remarkably consistent. Standing on the steps of Springfield's Old State Capitol 21 months ago to launch his presidential bid, the junior Senator from Illinois gave a speech that mentioned business leaders exactly once - when he cited the steel mill closed by "distant executives," wiping out jobs in the Chicago neighborhood he tried to organize after his corporate stint. And throughout his presidential campaign, his stump speeches brimmed with references to the "greed" of Wall Street and overpaid CEOs.

Now, though, the inconvenient twists of history are about to force President-elect Obama into becoming that man he saw in the elevator image - captain of industry - thanks to massive, unexpected government intervention. Every presidential candidate starts from the naive proposition that the nation's destiny can be controlled with a series of bulleted policy prescriptions. George W. Bush was going to bring compassionate conservatism and an end to foreign nation-building; then terrorists attacked. Obama developed earnest position papers on tax policy, health-care reform, and clean energy; then the economy crashed.

Until last summer candidate Obama had the luxury of focusing on how to help a middle class that could still find jobs. Too often they were jobs that meant a cut in pay or a loss of health-care benefits, but they were jobs nonetheless. Now President- elect Obama must craft an emergency rescue mission to prevent the kind of recession that many economists fear could be the longest and deepest since the 1930s.

In doing so, this former community activist - more than any President since F.D.R. - will shape the contours of a new industrial era. "If this financial crisis taught us anything, it's that we cannot have a thriving Wall Street while Main Street suffers," Obama said on election night. "In this country we rise or fall as one nation, as one people." Gracious words, but how he goes about creating this new sense of economic fairness will be a central debate of his presidency.

Steering a government that will be deeply involved in owning and regulating business, he will be in a position to pick future winners and losers from among those companies that come to the federal bank, hat in hand. Inheriting an already quasi-nationalized banking industry, he will oversee the use of taxpayer money by private lenders - and face possible pressure from fellow Democrats to direct that flow of credit. Guiding an economy already slipping into a painful recession, he will sit atop the biggest pot of funding and capital available - the U.S. Treasury.

"Government is the most reliable source of short-term growth, the only part of GDP pulling out its wallet these days," says Obama economic advisor Jared Bernstein. "There is a time for budget austerity - this ain't it."

In the coming weeks and months those purse strings will be loosened, first for another major stimulus package that includes ready-to-launch infrastructure construction projects - and then for producers of clean energy like hybrid-auto technology and low-emission coal.

His advisors say he's determined to pursue his $150 billion, ten-year energy plan despite the unexpected federal outlays caused by the recession and near collapse of the financial markets. The purse will open again in the form of tax breaks for small businesses and for big companies that create new jobs - but not for firms building operations overseas and not for oil companies, which face the prospect of a windfall-profits tax.

President-elect Obama will be in a position to shape the future of a fragile housing industry - and its related financial markets - when he decides the fate of Fannie Mae (FNM, Fortune 500) and Freddie Mac (FRE, Fortune 500), both now under government conservatorship. That will be a telling episode, pitting Obama, with his personal ties to the affordable-housing movement, and powerful Democrats on Capitol Hill like Financial Services Committee chairman Barney Frank against some of Obama's top advisors, who blame those twin behemoths for helping spawn the current financial crisis.

President-elect Obama will create a new playing field for globalization, as well as unionization, which are subtly connected in the minds of his economic team. A sharp critic on the campaign trail of free-trade agreements, Obama has embraced the labor leaders who have blocked trade deals. Nevertheless, he claims to be a "free-trader." How will he reconcile that? With deft political dealmaking: If the new President supports legislation to promote unionization at American firms - an effort called "card check" widely feared by business - advisors say labor leaders will grant him more leeway to pass free-trade deals.

"With Obama there is an opportunity for a kind of horse-trading around labor's agenda, something that didn't happen with Bush or even Clinton," says Bernstein.