The genius behind Steve 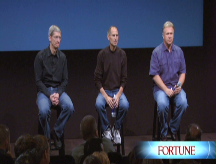 When a star CEO leaves
Here's a look at what happened when nine famous business leaders left their empires.
View photos

(Fortune Magazine) -- Let's start with some uncomfortable truths. We wouldn't be publishing an article about the under-the-radar guy who's most likely to succeed Steve Jobs as chief executive of Apple if Jobs himself hadn't shown up at a company event in San Francisco in June looking frightfully skinny and pale.

Jobs, after all, is a pancreatic-cancer survivor, having beaten a treatable form of the disease in 2004. Since that appearance last summer, Apple's excitable investor base and blogosphere have spun full tilt wondering about their hero's health, a topic that - other than the pithy retort here and the acerbic talk-to-the-hand comment there - Apple's CEO has declined to address.

Then there's the widespread opinion inside and out of Apple (AAPL, Fortune 500) that the Magician of 1 Infinite Loop simply can't be replaced.

There is only one Steve Jobs, one table-pounding visionary who can refashion whole industries with a wave of his hand. The mere hint of a Jobs health scare knocks billions of dollars off Apple's market value. (Temporary hit from a false web post in early October about a Jobs heart attack: $10 billion.)

The most influential promoter of Steve Jobs' indispensability, of course, is Steve Jobs. But another person who is very much with that program is the one executive who has actually filled in for Jobs as CEO. That would be Tim Cook, Apple's chief operating officer and its interim chief executive for two months in 2004, when Jobs was recovering from cancer surgery.

Cook may be right; we simply don't know the status of Jobs' health. Yet succession plans at giant corporations typically aren't built on hope. Apple's plan to replace the 53-year-old CEO is known for sure only to Jobs and the company's seven other board members.

Though he is highly regarded as a business-operations maestro, few people outside of Apple have any sense of whether Cook (who, for the record, turns 48 in November and is a fitness nut) would be a good chief executive, much less a suitable replacement for Steve Jobs. Even careful Apple watchers don't quite know what to think.

"By default Tim Cook would be the logical guy," says Toni Sacconaghi, an influential Apple analyst at brokerage firm Sanford C. Bernstein. "Yet that hasn't been spelled out. And the stakes are just higher at Apple, because Steve is larger than life, and Tim isn't a known quantity."

Tim cook arrived at Apple in 1998 from Compaq Computer. He was a 16-year computer-industry veteran - he'd worked for IBM (IBM, Fortune 500) for 12 of those years - with a mandate to clean up the atrocious state of Apple's manufacturing, distribution, and supply apparatus. One day back then, he convened a meeting with his team, and the discussion turned to a particular problem in Asia.

We know what you're thinking: Why dwell on the backroom aspects of such a sexy company? Because that seemingly dull stuff is as important to Apple's success as the gorgeous designs and ultracool marketing. Forecasting demand, for example, and executing against that forecast, are critical in the computer industry, especially when new products quickly cannibalize the old.

Consider what befell Palm (PALM) in 2001. The company torpedoed an entire quarter's performance by announcing a new version of its mainstay PDA - which helped dry up sales of the old version - and then failing to deliver the new product when the company said it would.

Those kinds of flubs just don't happen at Apple, which routinely pulls off the miraculous: unveiling revolutionary products that have been kept completely secret until they magically appear in stores all over the world. The iPhone, the iPod, any number of iMacs and MacBooks - the consistently seamless orchestration of Apple's product introductions and delivery is nothing short of remarkable.