Budding Buffetts: Where to begin?

The Oracle's advice to young investors? "Read everything you can." 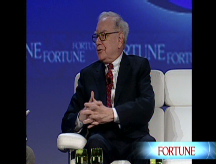 The questions show no sign of having been arranged ahead of time. There is no invisible hand of a PR flak guiding things, no particular order by theme or subject matter.

There is nothing that makes the shareholders themselves, their questions, or even the delivery of those questions come across as insincere or planted - although one or two seem to have an agenda. Still, there is almost nothing to tip off Warren Buffett to what's coming.

It's just a lot of people asking questions, unfettered.

A dichotomy begins to emerge. Professional investors from the East Coast and from California tend to enunciate their own names clearly - you get the sense that one or two of them want to make an impression on Buffett himself - before launching into tightly scripted questions about specific financial topics.

Shareholders who aren't professional investors, on the other hand, often hurry through their identities and ask loosely constructed, but farther-ranging questions, from "What advice do you have for long-suffering shareholders of the New York Times?" to "How would you fix the healthcare system?"

There's even a rambling question about John and Abigail Adams - two of Munger's favorite historical figures, as almost everyone in the arena already knows. ("Did you know them, Charlie?" Buffett quips, to laughter.)

The question that is asked most frequently comes from younger members of the audience.

The question is, "What should I do to become a great investor?" and it is asked for the first time by an earnest 17-year- old from San Francisco who says he is attending his tenth consecutive meeting.

Buffett's emphatic answer is simple and straightforward: "Read everything you can," he says with finality.

This is advice that Buffett has been giving for years, and it is advice that he will give in different ways throughout the morning and afternoon, for he strongly believes - and Munger concurs, calling Buffett "a learning machine" - that it was the reading he did in his formative years that shaped his approach to investing and prepared the groundwork for the next 50 unprecedented successful years.

And Buffett isn't kidding when he tells the young man, "Read everything you can."

"By the age of 10," he goes on, "I'd read every book in the Omaha Public Library with the word finance in the title, some twice."

Buffett's reading habits did not stop when he was 10. He still reads literally thousands of financial statements and annual reports each year - as he has done for each of the last 50 or more years that he's been investing. Friends and acquaintances who are invited to share a jet with Buffett report that he'll chitchat briefly and then start reading. Andrew Kilpatrick, author of the massive Buffett hagiography - Of Permanent Value -- reported that Buffett once mentioned, while the two were at a book signing, that he had 50 books at home, waiting to be read.

Buffett does not advise the 17-year-old from San Francisco to read any particular books, although he does mention the profound impact that value-investing guru Benjamin Graham's "The Intelligent Investor" had on him when he read it for the first time. "What I'm doing today, at age 76, is running things through the same thought process I learned from the book I read at 19." Nor does he steer the budding Buffett toward any particular investment style. Instead, he advises reading everything possible to find the style that suits the individual. "If it turns you on, it probably will work for you," he says.

Buffett also recommends doing something else besides reading: "Invest - on a small scale - don't just read."

"Charlie," he says, "you have anything to add?"

Munger stirs from the implacable position he maintains throughout - seated stiffly in his chair, arms folded, eyes distorted by Coke-bottle-thick glasses - and leans slightly forward toward the microphone on the table before him. He suggests a logical approach that's typical of almost everything he will say during the session.

"Ask, 'What do you own and why do you own it?'" Munger says. "And if you can't answer that," he declares with absolute finality, "you aren't an investor."

Buffett concurs, and repeats for the budding Buffetts in this crowd what he has told shareholders and students alike over many years (Buffett taught an investing course at the University of Omaha in the 1950s and speaks to as many as 30 student groups each year): "If you can't write an essay describing 'why I'm going to buy the entire company at the current valuation,' you have no business buying 100 shares of stock."

Of course, there is more to what has made Buffett a great investor than this - as we will come to understand as the day continues.

But it all began by reading.