To avoid another big spike in gas prices, raise the gas tax and let market forces go to work. 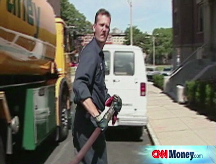 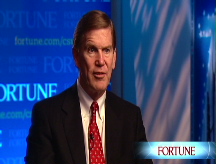 NEW YORK (Fortune) -- The big game in Washington these days consists of running around dealing with the problems of the Detroit Three automakers, formerly the Big Three.

But all the to-ing and fro-ing about how (or whether) to keep General Motors (GM, Fortune 500), Ford (F, Fortune 500) and Chrysler out of bankruptcy is ignoring the elephant in the room - lower gasoline prices. As you doubtless know, they've fallen about 50% from the record levels they reached in July, making them one of the few bright spots in our economic picture.

So let me fulfill my traditional role of skunk in the garden party, and suggest that these lower gas prices aren't an unalloyed good thing. Let me also suggest that we jack them up, sharply, by adopting a big honking tax on gasoline.

This idea has been around for years, and has gotten no traction. But it's an idea whose time has come, given the stomach-churning ups and downs of gas prices, the visible folly of leaving our fate to oil-exporting countries and the speculators who helped drive prices irrationally high and may now be driving them irrationally low, and the fact that we'll soon have a president who proposed targeted tax increases during the campaign and still got elected.

Yes, a big gas tax would cause economic hardship, especially to people who are barely making ends meet. But we could refund the money to those needy people through the income tax. We could also refund the gas tax to those of us who aren't particularly needy, or else use it for energy research-and-development or public works or - dare I say it - for deficit reduction.

The idea of this tax isn't to inflict pain or get people out of cars - it's to make gasoline prices predictable so that automakers and consumers could make rational, long-term decisions rather than being subject to the rollercoaster ride we've taken in the past year.

A high tax would hold down gas consumption, making it more difficult for oil-producing countries to gouge us again when the world economy recovers. Even though we'd be paying more than we're paying now, we'd be paying much less than the $4-plus we paid this summer.

Having permanently high gas prices would let the market, rather than incomprehensible, loophole-ridden Corporate Average Fuel Economy regulations, make the decisions on what kind of vehicles Americans get to drive.

Talkback: Is a giant gas tax the answer? Tell us what you think

As part of my plan, I'd scrap these CAFÉ standards, abandon the current attempts to force automakers to spend tens of billions of dollars to meet higher fuel-economy standards. Instead, the market, guided by a high gas tax, would rule.

Before you send me a scathing e-mail about my being a car-hating elitist, you should know that I live in a suburb and own two vehicles, one of them an SUV. When it cost me more than 50 bucks to fill the SUV's tank this summer, I was not a happy camper. Even though the money wasn't enough to make any serious difference in how I live my life, I winced. And I kept thinking of how I'd rather be paying this price to ourselves, rather than having the money go to oil-producing countries, many of which - Russia, Iran and Venezuela come to mind - are ruled by governments that are no friends of the United States.

Unless we can summon up the political will to slap a big tax onto gasoline, we'll be setting ourselves up for the next spike in oil prices. History shows that unless we do something to hold down demand, there will be a spike, whether it comes from a world economic recovery or some a terrorist strike against oil facilities or something that we can't forecast. But with a high gas tax holding down consumption, we'd be using much less imported oil than we do now, and we'd be far less vulnerable.

As a final argument, permanently-high gasoline prices will avoid the whipsaw effect - the federal government giving the Detroit Three money to step up production of high-mileage vehicles that will hit dealerships at a time when low gas prices will destroy the market for them.

There are plenty of things we ought to do to establish rational, market-driven energy policies. We'll deal with those another day. But a gas tax would be a good first start. I don't expect to see that any time soon - but I can always hope.

Do you agree? As painful as it would be for some, is a big gas tax the only way to stabilize prices at the pump? Tell us what you think.

How to fix the Big Three