The topic is taboo in most of corporate America. But the workplace is often central to the struggle - as sanctuary, source of income, and sometimes crime scene. 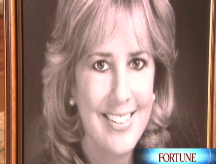 More Videos
Domestic violence in the workplace
The following are helpful resources for employers who want to tackle the problem and employees who need coaching and help. Click on the name to be directed to the website.

(Fortune Magazine) -- Cindy Bischof was not the kind of woman who would normally let a boyfriend get in the way of her career.

Driven, persistent, productive, she was everybody's favorite partner at Darwin Realty, a commercial real estate firm on the outskirts of Chicago. She was a role model to the firm's young women, a mentor to junior brokers, a 43-year-old overachiever: in at 5:30 A.M., networking at lunch, so smart about heavy industry that her peers voted her Industrial Broker of the Year.

Cindy was neither submissive nor easily intimidated - which is why what happened to her on March 7 is all the more shocking.

For nearly a year Bischof had been trying to untangle herself from a soured five-year relationship with an out-of-work salesman named Michael Giroux. After their breakup in May of last year, according to friends, family, and police reports, the handsome and charming Giroux suddenly turned strange and dangerous.

The day they broke up, Bischof changed the locks on her house. That night she went to stay with her parents. Giroux smashed the back windows of her house, broke in, and threw paint all over her furniture, rugs, and appliances.

Giroux began calling her incessantly on her cell phone. He stalked her at her house, at her parents' house, even on the golf course.

Bischof's torment became Darwin Realty's nightmare as her co-workers rallied around her. They helped clean up the damage to her house, which cost her $70,000, according to police reports. The head of Darwin's construction department installed a camouflaged infrared deer-hunting camera in the bushes of her backyard to take pictures of her deck at night.

In August, it caught Giroux there with a rope, making a noose. Darwin's president, George Cibula, arranged for Bischof to move into a rental property 30 miles away in Plainfield so that Giroux couldn't find her. Cibula hired security guards for the company Christmas party. Sometimes Cindy's partners walked her out to her car at night, just in case.

But Bischof was alone that Friday afternoon in March as she left her office and headed to her car, looking forward to joining her parents at her condo in Estero, Fla. Minutes later, Brian Liston, a Darwin partner working in a corner office, heard four gunshots behind him. He turned and there, outside his office window, lay Bischof, face down on the parking-lot pavement. Giroux, wearing a baseball cap and a fake mustache, had been lying in wait at the tire store next door. He shot and fatally wounded her before shooting himself in the head.

While police spent hours investigating the obvious, employees huddled in the hallways and conference rooms as shock turned to horror and then to unbearable grief. "It's still not over," Cibula said months later, choking up. "All you can do is endure the shock of it."

As the boss, he doesn't know what he could have done differently. He couldn't shield his staff from the trauma. No amount of security would have stopped so determined a killer, he believes. "If everybody brings their problems to work, pretty soon you're a psych hospital," he says. "Cindy knew that, and she tried. But we butted our way in anyway because she was our friend."

Domestic violence is still a taboo topic in most of corporate America, and no wonder. Logic won't address it. It carries a great stigma. It raises difficult questions in high-powered workplaces that employ - let's face it - both perpetrators and victims.

Many executives believe the issue has no place at work. What happens at home is supposed to stay at home, especially matters of the heart. In a survey of 200 CEOs sponsored by Liz Claiborne Inc. (LIZ, Fortune 500) last year, most agreed that domestic violence was a serious issue, but 71% said they didn't believe it was a problem at their own companies. Only 13% felt that corporations need to play a major role in addressing domestic abuse.

Soon, though, they may have no choice. Employee attitudes, demographics, and the efforts of some CEOs are converging to drag this issue out of the closet. With so many women in the workforce, and with e-mail, text messaging, and cell phones connecting them to the office around the clock, domestic violence comes to work whether executives like it or not. Employees are well aware of this.

According to the Liz Claiborne survey and another conducted for Verizon Wireless (VZ, Fortune 500) last year, an overwhelming majority of workers wish employers would develop policies to deal with it. To press the point last month in New Canaan, Conn., home to a disproportionate number of top executives, a small army of police officers, volunteers, and high school athletes and coaches showed up at the train station at 5:30 A.M. one morning to hand out domestic violence information to commuters bound for Grand Central Station.

"What is not in sync here is that the average person on the street knows what's going on, but company programs have not kept pace to help employees," says Dede Bartlett, a former senior officer of both Exxon and Altria who is part of the "domestic violence underground railroad" that quietly helps women like those in this story. "This takes top-down leadership," she says. "It's got to be the CEO."

Now a small but growing group of CEOs is saying that it's time for corporate America to confront the issue head-on. Domestic violence affects the bottom line, they say. It threatens workplace safety. As an HR issue, it's much more volatile and potentially dangerous than drug addiction or alcoholism.

"I'd like to see more done about this," says Thomas J. Wilson, CEO of Allstate, one of the CEOs who sees it as a major issue affecting employees, customers, or both. At Verizon Wireless, which handled about 100 abuse cases internally in the past year and roughly 225 more through its employee-assistance programs, "the numbers speak for themselves," says Martha Delehanty, vice president of human resources. "This is an issue we must address."

Talkback: Is domestic violence a workplace problem too? Tell us what you think

Although Liz Claiborne made it a corporate cause nearly two decades ago, William J. McComb says he was stunned at what he learned about domestic violence after moving to Liz from Johnson & Johnson two years ago. "We have a responsibility here," the CEO says. "More leaders in the business community need to understand this issue better."

One in ten a victim

Take a look around you. One in ten of your colleagues is probably a victim of domestic abuse, according to recent research by two professors at the Sam M. Walton College of Business at the University of Arkansas.

In a study of three large companies spanning 39 states, 10% of workers who responded to survey questions said, "Right now I am going through this," says Anne O'Leary-Kelly, a management professor who conducted the study. (Though she and co-author Carol Reeves got the same results from both men and women, their research indicates that women are abused much more frequently and severely.) An additional 19% of the men and 30% of the women said they'd been victims at some point in their lives.

"We were startled," says O'Leary-Kelly. "Those numbers suggest a large number of employees are struggling to juggle this personal situation with their jobs."

Contrary to popular opinion, studies show that battered women are more likely to be employed than not. And spousal abuse occurs at work with surprising regularity, O'Leary-Kelly and Reeves found - 19% of current victims said some abuse was occurring at work.

The reasons become clearer when you understand what domestic abuse is and what it's not. It isn't just spillage from an abnormally bad marriage. It can't be chalked up to problems with self-control or alcoholism or anger management, though it can be mixed up with all those. It's not really about love or jealousy; it's about subjugation - an obsessive need to control one's partner.