Treasury scores an A for effort in the financial rescue, but observers give it middling marks otherwise. 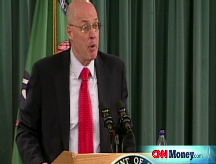 NEW YORK (Fortune) -- It may be years before we can judge the government's success in fighting the financial crisis. But an early assessment of Henry Paulson's Troubled Asset Relief Program is already taking shape.

The Treasury secretary gets good marks for being flexible and aggressive in the face of an economic shock that has sent stocks tumbling and unemployment rising. Enacting the legislation that created the TARP "has already allowed us to take decisive action to prevent the collapse of our financial system," Paulson told the House Committee on Financial Services Tuesday. He's not the only one who sees it that way.

As Sen. Barack Obama, the president-elect, said on 60 Minutes Sunday, "I think the part of the way to think about it is things could be worse."

But if Paulson gets an A for effort, the marks on the rest of the report card are less glowing. While the Treasury secretary has said repeatedly that one of his aims in deploying his $350 billion war chest is to restore confidence in markets and financial institutions, a look at depressed stock prices and stressed-out bond markets says he has yet to succeed. Call that an incomplete.

The rest of the grades are mediocre at best. Observers also take issue with the way Treasury has spent the money, pouring billions of dollars into banks with few strings attached while largely ignoring two other problem areas: troubled consumer credit markets and homeowner relief. Paulson gets poor marks as well for failing to clearly explain just why the focus of the TARP has changed so drastically.

The mixed results for the $350 billion plan may offer lessons for Paulson's successor as Treasury secretary when Obama takes office in January. Paulson said Monday he won't spend the second half of the $700 billion Congress appropriated for the TARP in October - which will give the new administration some firepower, along with a need to set clearer priorities.

"You have to think about exactly what you want to accomplish," said Morris Goldstein, senior fellow at the Peterson Institute for International Economics. "The problem is if you change your purpose too many times, you lose support for the plan."

Changing on the fly

Changes are all too familiar in the two-month-old story of the TARP. After setting out in September with the express intent of unlocking the markets for illiquid mortgage-related securities, Paulson spent October recapitalizing the banking system.

To Paulson's credit, he did more than just announce a plan: Treasury managed to send out $115 billion in checks within a week of publicizing the decision to buy preferred stock in big banks like Citigroup (C, Fortune 500), Wells Fargo (WFC, Fortune 500) and JPMorgan Chase (JPM, Fortune 500). "In Washington," he said, "that is a land-speed record from announcing a program to getting funds out the door."

But while Treasury was setting that record, it was abandoning what had been the center of the TARP: a plan to stop the decline of housing prices by purchasing mortgage-related securities. Paulson said last week he won't buy mortgage assets.

The move puzzles backers of the mortgage purchase plan, who say the need to unlock the markets for loans bundled into securities - a key channel for consumer credit creation - remains unmet.

"While I was not shocked by the shift in emphasis for use of the TARP funds," said Edward E. Gainor, a lawyer at McKee Nelson in Washington, "I was disappointed by how poorly it was explained."

Gainor, who represents funds pursuing distressed asset investments, says Paulson has inexplicably failed to address the very problems in the mortgage market that he set out to address - a decision with potentially serious consequences for the availability of credit in a slowing economy.

"Treasury's lack of creativity in utilizing the authority granted under the TARP has been disappointing," said Gainor. "Treasury could have used the TARP to stimulate recovery of the securitization markets for mortgage loans and other consumer loans, but has not yet done so."

Meanwhile, with the TARP's focus having shifted radically in the space of two months, some now wonder just what Paulson's trying to accomplish. For instance, Treasury chose to withhold TARP funds from struggling Cleveland lender National City (NCC, Fortune 500), thereby forcing the bank into the arms of healthier PNC (PNC, Fortune 500). Actions like that suggest the Treasury may be pursuing a plan to decrease the number of banks - though it hasn't said so.

"It seems that Paulson and his staff haven't been entirely forthcoming with their intentions," said Hal Reichwald, a banking and finance lawyer at Manatt Phelps & Phillips in Los Angeles.

Reichwald says Paulson appears to have decided early on that the original TARP approach wouldn't work. But he didn't tell Congress, which Reichwald says would not have smiled upon a plan to pour hundreds of billions of dollars into banks without many strings attached.

Treasury's failure to fully and promptly explain its decisions to taxpayers isn't the only issue. The design of the TARP - which was presented to Congress in September, just days after the collapse of Lehman Brothers and the near implosion of AIG (AIG, Fortune 500) - has its critics too.

Take the controversy about whether banks receiving taxpayer funds are lending out enough money to support an economic recovery. Reichwald notes the measure passed by Congress fails to specify how much TARP participants are expected to lend - yet spells out in great detail their executive pay guidelines.

"I scratch my head as to why they didn't put a lending qualification in," he said. Now that the rules are in place and the money is being distributed, Reichwald adds, regulators can jawbone banks to lend more, but exerting more pressure will be difficult.

Making big decisions in the midst of a crisis also is a recipe for unintended consequences. Consider the cries for relief from troubled General Motors (GM, Fortune 500) - or, for that matter, the recent stampede of nonbank financial companies from Goldman Sachs (GS, Fortune 500) and American Express (AXP, Fortune 500) to insurer Hartford Financial (HIG, Fortune 500) to become banks in a bid to qualify for federal rescue funding.

"The problem now is you have more and more people wanting the money," said Goldstein. "But these applications are less and less in keeping with the original financial stability concept."

These sorts of problems remind us why government typically takes considerable time in the run-up to a new policy.

"A policy debate on issues like this typically goes on for months and years," said Reichwald. "In this case, they're doing it on the fly with no debate, and we won't know how well it all works till well after the proponents of these ideas are out of office."