Remember how home-grown online video was going to be the future? Well, it's not turning out that way. 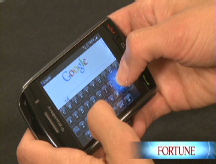 Faceoff: 4 top smartphones
Apple's iPhone may have set the standard for a new generation of smartphones, but plenty of would-be competitors abound. Here are four top picks for the PDA-obsessed.
View photos

LOS ANGELES (Fortune) -- If you visit YouTube.com - where close to half of all online video is seen - the power-to-the-people motto "Broadcast yourself" appears at the top of your browser. Lately, though, it's hard not to wonder if the "you" in YouTube doesn't increasingly refer to "them": the Big Kahuna media companies whose video wares have been gaining more notice both on YouTube and elsewhere on the web.

Just in recent weeks, YouTube has signed deals with CBS (CBS, Fortune 500) and MGM that are noteworthy because both involve airing full-length TV shows like "Star Trek" and films like "Bulletproof Monk" on the site. Clearly these aren't the user-generated clips on which the three-year-old site built its primacy (and got itself acquired by Google (GOOG, Fortune 500)). And even before those deals, YouTube had channels for all sorts of professional clips - everything from the BBC to Discovery Channel to Oprah to the NBA.

Of course, there is still a staggering volume and variety of Diet-Coke-and-Mentos-grade home video being uploaded to YouTube - some 13 hours of it each minute. And putting full-length Hollywood material on the web's top video site is a logical next step. In some respects, YouTube is playing catch-up to compete with the flood of shows available on the web from all the major TV networks, both on their own sites and others like Yahoo (YHOO, Fortune 500) and Hulu.

So far, YouTube has struggled to figure out ways to generate significant revenue from its vast ocean of clips. Not that the traditional media folks are minting it online either. But as Michael Lynton, the chairman of Sony Pictures Entertainment, points out, advertisers are mainly interested in web video that is "programmed" both in terms of knowing precisely what it is and when and where it will appear - user-generated content, by nature, is neither of those things. (YouTube does not give out breakdowns on pro vs. am popularity. But its list of the top-ten most-viewed videos of all time includes a bunch of pro music videos and comedy routines, a Spanish-language short film, and a user-uploaded clip of a laughing Swedish baby that has been viewed nearly 67 million times. Go figure.)

What's obviously happening here is the beginning of a monumental battle for online video viewers' attention. The consulting firm ABI Research predicts more than a trillion videos will be streamed worldwide in 2013, up from 32 billion in 2006. Meanwhile, a recent IBM (IBM, Fortune 500) survey shows that web-video viewers around the world are watching less TV. Indeed, a second front in this battle for eyeballs opened up this year via a flood of professionally produced "webisodes" from the likes of Sony (SNE), NBC (GE, Fortune 500), and the respective creators of "Buffy the Vampire Slayer" and "The Family Guy."

This was the first year that original video content for the web had something approximating a fall season and - mirroring what's happened in conventional TV - breakout hits have proven to be as rare as a Javan rhino. Sports and comedy always do well, and "branded entertainment" - webisodes paid for by advertisers with their products integrated into their stories - have proliferated. (That raises a third, unnerving, possibility: that the future of video may be determined neither by users nor media companies, but by marketers.)

Where's this all going? Big media will put more and more full-length material online for two reasons. One, streaming content online actually makes it harder to steal. Two, viewers are moving to the web anyway, and it's a zero-sum game. CBS and Fox (NWS, Fortune 500) and the rest would rather people watch their stuff online than have them go to Dailymotion, break.com, or any of the other video sites out there. At some point not too far off, the distinction between the web and what we think of as TV will eventually dissolve away anyway.

Don't get me wrong: User-generated video isn't going away. (You almost wonder if YouTube and and its Google owners should largely stop trying to commercialize it, and instead keep the platform true to its community-based origins, along the lines of Craigslist. But that's not the kind of thinking that made Google a $100-billion-plus company.)

YouTube or someone else may yet figure out how to get rich on user-generated content. But for the most part it's a cultural phenomenon, not a commercial one.

You - that is, the Time 2006 Person of the Year "you" - will not drive the web video revolution. The pros will still be pros, just as they were in the late 19th century. That's when, to cite one relevant historical example, the advent of consumer cameras was supposed to obviate professional photographers. The Internet is fantastically egalitarian, but only to a point.