The New York Fed chief is a fresh face, but still a Washington insider. 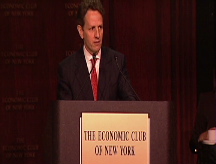 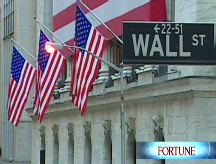 NEW YORK (Fortune) -- What does the likely choice of New York Federal Reserve chief Timothy Geithner as his Treasury Secretary say about our President-elect? Simple: He believes in change, just not too much of it.

Geithner's selection emphasizes continuity and experience, the benefits you'd get from keeping Hank Paulson in the job, but is more appealing because the 47-year-old central banker gives the appearance of a fresh face arriving in Washington. Yet he is a Washington veteran whose fingerprints are all over the federal government's attempts to rescue ailing financial markets.

The harsh economic lesson facing President-elect Obama is that markets don't like change. Since his Nov. 4 victory, the Dow Jones average has gyrated wildly, ending 2,073 points lower as of Thursday, Nov. 21. Of course, the Dow's stomach-churning fall below the 8,000 mark this past week can be attributed to frightening economic realities ranging from the stubborn persistence of a global credit crunch to the shaky conditions of name-brand financial firms and automakers.

But uncertainty about the incoming administration also played a role. That much became clear Friday, when the Dow surged nearly 500 points, ending at 8,046, after news of the Geithner choice emerged. Obama is reportedly planning to unveil his entire economic team next week, as early as Monday, in order to further calm markets.

Meanwhile, the President-elect is already taking ownership of the troubled economy he will inherit. In his weekly radio address, Obama acknowledged that the economy is "likely to get worse before it gets better."

"We now risk falling into a deflationary spiral that could increase our massive debt even further," President-elect Obama said.

Noting that "we've lost 1.2 million jobs this year" and could lose millions more before the crisis is over, Obama said he has directed his economic team to design a massive federal jobs plan, employing 2.5 million Americans by 2011 to rebuild roads, bridges and schools and to construct alternative-energy projects including wind farms and solar-power installations.

Among the candidates Obama considered for Treasury Secretary, Geithner was the least well known to him. Former Treasury Secretary Lawrence Summers, who is now expected to be tapped for a top White House job, was part of Obama's inner circle of economic advisers during the general election campaign.

But Geithner and his likely new boss have much in common, starting with age: They were born just 14 days apart. Both men have lived overseas: Obama as a young boy in Indonesia; Geithner as the son of a U.S. AID official who spent part of his childhood in India and Thailand. And Geithner, despite his even temperament and serious demeanor, has a wicked sense of humor that would appeal to the President-elect.

Geithner, moreover, brings the kind of nonpartisan, pragmatic-minded approach to the job that Obama has insisted he values on his economic team. Geithner, who has a master's in international economics from Johns Hopkins' School of Advanced International Studies, does not have a doctorate in economics or experience as a private sector banker. But he is a quick study and notably circumspect about how one part of the economy affects another. During his career he has sought counsel from a range of experts that cross the political divide, from Republicans like Henry Kissinger (his first boss), Alan Greenspan and John Thain to Democrats like Robert Rubin and Summers, his successive bosses as Under Secretary of the Treasury for International Affairs during the Clinton administration.

In his radio address, President-elect Obama said that Jan. 21, his first day in office, would bring a "new direction, new ideas and new reforms" -- and certainly an FDR-style federal jobs program would mark a big change from Bush administration's approach to the economic crisis.

But it's not clear Obama will bring much change to the Treasury's $700 billion rescue effort that has members of Congress growing increasingly impatient. It was Geithner who engineered J.P. Morgan's buyout of troubled Bear Stearns with a $29 billion loan from his New York Federal Reserve bank -- the first of the government's serial interventions in the markets -- and he has remained a key figure in efforts that followed.

Wall Street may applaud the Geithner appointment but there are members of Congress who will make his nomination hearing a grueling experience, largely out of frustration that the Treasury Department's ever-changing rescue attempts still haven't unplugged the credit crunch.

But this is nothing Geithner hasn't faced before. Last spring, it was Geithner who took on the heavy lifting during a Senate Banking Committee interrogation that also featured Fed chairman Ben Bernanke and SEC Chairman Christopher Cox. Geithner repeated, over and over and with much detail, his case that the Bear Stearns deal was made with taxpayer interests in mind, and with the intention of avoiding the "moral hazard" of a bailout that would reward dangerous risk-taking.

And, in a moment that showed that this longtime Washington hand, who was on the frontlines of dealing with the Asian financial crisis in 1997-98, is not easily intimidated by his inquisitors, Geithner insisted, "Can I just go through a few important things, for the record?"