'The biggest turkey I ever hired'

One new employee decided to take a nap in the CEO's office the first week on the job. Oops. 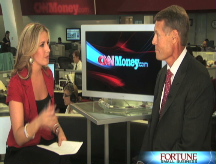 (Fortune) -- Folks, this can't be cheering news for job hunters, but lots of companies big and small have declared hiring freezes lately - and most of their managers, it seems, are breathing sighs of relief.

In fact, 69%, or more than two-thirds, of hiring managers in a recent survey said they'd rather muddle along with the employees they have than take a chance on hiring someone new. The poll, conducted last month by Caliper (www.calipercorp.com), a Princeton, N.J., leadership-development firm with a long list of Fortune 500 clients, surveyed 190 U.S. hiring managers across a variety of industries.

With Thanksgiving coming up, one question asked the bosses to "describe the biggest turkey you ever hired." A sampling of the answers:

Needless to say, if some new hires turn out to be turkeys, lots of hiring managers are no prize pigs themselves, and I expect we'll hear about them, too. Click on over to the Ask Annie blog and tell us: What was the worst hire you've ever made - or who was the biggest turkey you ever went to work for? Happy Thanksgiving, everybody!