A slow and steady investing strategy

Investor Daily: During the flat market of 1966-1982, investors who kept investing every month earned better returns.

By Adam Lashinsky, senior writer
December 3, 2008: 7:38 AM ET
Fortune Investor Daily
The heart of the recession 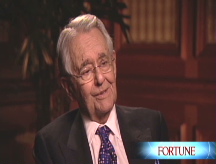 SAN FRANCISCO (Fortune) -- Though the investment industry likes to remind prospective clients that, "past performance is no promise of future results," history often is our best guide to where we're going next. It's also a source of anxiety, especially when we consider periods that have been unkind to hopeful investors.

One such period is the now oft-cited span between 1966 and 1982, when the broad market was effectively flat.

If in relatively recent memory investors endured a 16-year dry spell - which meant that a decision to go "all in" at the beginning would take 16 years to pay off - what does that say about prospects for investing now? What if, in fact, we're staring into the abyss today? Could we be facing a time when, though we've already fallen so far, we won't recover for years to come? And at the risk of being naive, would that make this a bad time to invest?

To answer these questions, it helps to ask two more. First, was the 1966-1982 period really that bad? Second, would dollar-cost averaging - making a series of steady investments - have produced better returns?

The short answer to the first question is no, that stretch from Johnson to Reagan wasn't all that bad. True, the Dow Jones industrial average ended the era where it started. But dividends were healthier back then, as companies felt more of an obligation to share a portion of profits with their shareholders. According to numbers run for Fortune by Vanguard, the Dow Jones industrial average returned an annualized 5.21% from the first day of 1966 to the last day of 1982. The S&P 500 index, upon which Vanguard built its asset-management empire or passively managed index funds, fared even better: an annual total return of 6.81%.

So not only was that period significantly better than the flat line it appears to be, it also recorded significant gains (and losses) along the way. The point is that there were periods within that timeframe when investors were able to make significant money.

Today the broad market yields closer to 3%, so if prices remain flat for a long time, simply buying and holding won't be as rewarding as it was back then. But it is still important to consider dividends when assembling a portfolio.

An even more pressing question is whether dollar-cost averaging regularly improves your returns. The numbers, again courtesy of Vanguard, are interesting. The total return for someone who invested $5,000 in the S&P 500 starting in January 1966 and then $100 a month for the next 16 years would have been 7.92% for the period, compared with 6.81% for someone who invested everything at the outset. (Vanguard didn't have comparable data for the Dow.) In other words, in a mediocre market, dollar-cost averaging helped an investor improve his return by just over 1% a year.

That's good but not great, which is why Vanguard is lukewarm on dollar-cost averaging. "We've always thought dollar-cost averaging was better considered as a risk-reduction strategy" than a return-booster, said Fran Kinniry, a principal in Vanguard's investment strategy group. "Most people save as a percentage of each paycheck," which is a savings strategy rather than an explicit attempt to spread out investments.

Vanguard doesn't frown on dollar-cost averaging, mind you. It just thinks the technique can keep you from getting properly invested if you have cash that's waiting to be put to work. Kinniry reports that markets go up 75% of the time. As a result, not being in the market usually is worse than the alternative. Except, he cautions, if it's the day before the market crashes. "We don't have all the answers," he added. "All we can do is frame the choices."

The bottom line is that stocks tend to do well over long periods of time, even if the price indexes don't always seem to show that. Investing regularly is a discipline that mitigates the risk of investing at the wrong time. But it's no substitute for crafting a balanced portfolio that's appropriate for your situation. Can investors with long time horizons survive even a prolonged slump? Absolutely. And that's something to be thankful for.

Stocks in the bargain bin