With the new 911 Targa 4S, Porsche upgrades the most iconic sports car with a bevy of technical treats. 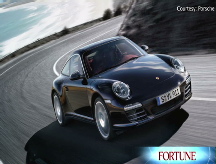 (Fortune Magazine) -- I hope you're hungry. Porsche's extremely, sublimely updated 2009 911 Targa 4S is quite a meal. It's haute meat-and-potatoes, a fusion of rare and raw (in the right places), comfort and spice, complexity and simplicity - a high-end palate pleaser that's mmm-mmm good.

I have to admit I had my doubts before I boarded the plane to Italy to actually drive the thing. Porsche is the most profitable car company on the planet. Period. It doesn't make anything remotely bad. Period. But how much more refinement can be stuffed into the 911's teardrop body? Is what's arguably the most enduring sports car of them all in danger of being ubiquitous by sheer cumulative production numbers? (Porsche estimates that 70% of all 911s produced are still on the road.)

When I arrived at the shores of Lake Garda, the Targa crouched before me in the parking lot. The subtle exterior tweaks for the 2009 model year made a surprising difference: A single piece of arching aluminum outlined the upper edge of the side glass all the way to the back of the car - a brush stroke. The new LED running lights glittered - a nice dab of sporty bling. The front air intakes have been enlarged - pure sculpture.

I suddenly understood why this car was here in the land of art and beauty. (Its name, in fact, refers to Sicily's famous former race, the Targa Florio, which Porsche often dominated over the decades.)

The allure carried over into the interior as well. Porsche put a larger central touchscreen display into the car, with enough capability to do away with literally half the buttons and switches in the last-generation 911.

The result is an exceptionally clean, refined interior, with the signature hooded gauges and lovely leatherwork - all bathed in the gentle glow of light from the more than five square feet of thermally insulated glass above. I love Targas - all the sun, almost no wind - and storage space where a convertible top would normally have to be stored.

I turned the car on, listened with satisfaction to its nasty growl, and took off on the curvy, narrow roads that spiderweb into the Mount Baldo range. True to its high-performance heritage, the Targa gripped the ground with tenacity and grace, accelerated like a slingshot, and handled so intuitively it felt as if it were mind-melding with me.

The most impressive feature of all, however, was the new PDK gearbox (if you insist on asking, I'll tell you: It stands for Porsche-Doppelkupplungsgetriebe). Using a double-clutch system, the brainiacs in Stuttgart have created a shifting mechanism that is one part videogame, one part magic.

I kept playing with the wheel-mounted shift buttons - up, up, down, down, up, down, up, down - just to convince myself the car shifts as smoothly as it does. No performance or traction is lost - when you're in one gear, the next is already spooled up and ready to activate. I couldn't stop.

Porsche has tucked myriad other technical treats into the new 911: The Targa 4S has a new direction-injection 385-horsepower six-cylinder. Compared with the previous model, power is up as much as 8.5%, fuel efficiency has improved by 10.5% (21 mpg average), and CO2 emissions have dropped 9.4%.

The "dynamic bending" bi-xenon headlights followed my every steering input. A new electronic traction-management system sensed the amount of power to be shifted to the front axle under hard driving - and adjusted accordingly within 100 milliseconds.

Just when I thought it was impossible to improve on the already insanely evolved 911, Porsche - master of precision, performance, and perfection - has done it again, in spades. Very tasty indeed.