'Dilbert' on how to save your career 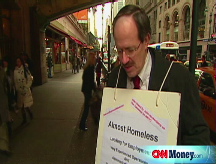 (Fortune) -- Scott Adams, creator of the comic-strip Dilbert, spent so many years in corporate middle management that his characters and story lines resonate with just about anyone who works for a big company. A college economics major because he "had heard good things about something called money," Adams' business career got off to a dicey start. He took a job after graduation as a teller at a bank in downtown San Francisco, where he was robbed at gunpoint twice in six months. That inspired him to join a management training program.

Adams left banking when his then-boss "told me the company already had too many generic white guys in senior management, and promoting me would only make things worse." He now owns two California restaurants, one of which he manages as a sideline to drawing Dilbert. His latest book, Dilbert 2.0: 20 Years of Dilbert (Andrews McMeel Publishing, $85) is a huge compendium of over 2,000 comic strips, some never published before. Some excerpts from our recent conversation:

Q. In what specific ways has the average workplace gotten worse since you started drawing Dilbert?

A. One thing that's definitely worse is that employers have a much greater ability to monitor employees' every move. They can count the keystrokes on your computer, keep track of where you go on the Internet, and so on. It's creepy. But the big macro change now is, employers are a lot nicer when the economy is strong, because they know you have choices and can go elsewhere if they don't keep you happy. When times are bad, the gloves come off and employers are less nice. People become disposable.

Q. Is there any advice you'd like to give any human resources people who might be reading this?

A. I try to avoid giving advice. But I wrote a book a while ago called The Dilbert Principle, about how I think the ideal workplace would be organized. If you don't have a lot of money to give people, then give them two other things. One is flexibility. Allow people to have a life outside of work. Does an employee have a reasonable chance of leaving the office on time, which I define as 5 p.m.? I mean, is that extra hour or two or three that people put in, in the evening, really necessary? And second, give them at least half an hour every day to learn something they don't already know. Lots of surveys of employee happiness show that keeping people happy in their jobs really isn't so much about money anyway, it's about these other things that many companies don't think to offer. Work is like the rest of life. The best parts are free.

Q. If Catbert were a real HR person, how would he lay someone off? What would he say?

A. In one comic I had the boss go up to Ted, who gets fired over and over again in my strips, and say, "Knock, knock." And Ted says, "Who's there?" And the boss says, "Not you anymore." Catbert usually does or says whatever is most cruel and heinous, so he would come up with something nastier than that. But you know, things are so bad now that parody gets difficult. It's hard to think of things that are worse than what actually happens.

Q. If Dilbert were real, would he still have a job?

A. No. I'm drawing a series right now where he gets laid off and he has to go through a really tough bunch of interviews to try and get another job. At one point he is asked whether he would take a bullet for a prospective employer and they make him go to a firing range to prove it.

Q. Is it just my imagination, or are many of the people at the very top of huge corporations really dumber than they were 20 years ago?

A. The goal of the people at the top now is to create what I call confusopolies. The barriers to entry to almost any business are so low now - any company can get into any business, just invest some capital and get your product made cheaply in China or somewhere - so everything is basically a commodity. So you have to make your product so complicated that people will pay more for it, just because they are awed by the complexity of it. This is what happened on Wall Street. You know, before the big meltdown, somebody asked Warren Buffett to explain how certain derivatives and credit-default swaps worked and he said he didn't understand them - and, although he was too modest to say so, what he was implying was that, if he didn't understand them, then nobody did. Well, that turned out to be true. The big investment banks were the ultimate confusopolies.

Q. When do you think we will see an economic recovery?

A. I always worry that our past successes were mostly due to luck, that we just happened to invent something the world needed at the time. For example, the birth of the automobile, or the rise of the Internet - some specific technology that becomes the centerpiece of the economic world and lifts us out of the doldrums. I don't really see anything like that on the horizon right now. Everyone's looking at "green" technologies, which makes me think it's not going to be that, it's going to be something else entirely that no one expects. Or maybe it's going to be nothing and those past breakthroughs were just flukes.

Q. I know you don't like to give advice, but do you have any general thoughts on how to cope with hard times?

A. The best plan now is to have as many bosses as possible. I call it boss diversity. If you work for a company and you have one boss and that boss doesn't like you or wants to get rid of you, you're in trouble. But if you work for yourself, you have lots of bosses, who are your customers, and if a few of them decide they don't like you, that's okay. You can get new ones. Boss diversity is the one kind companies don't talk to you about, but it can save your career.

Readers, what do you think? Is Dilbert right about the state of the workplace? Are flexibility and the chance to learn new things more important than making more money? Have you ever worked for a confusopoly? Post your thoughts on the Ask Annie blog.