Where in the world to put your money

International stocks are in even worse shape than U.S. equities - and that presents hardy investors with an opportunity to go abroad. 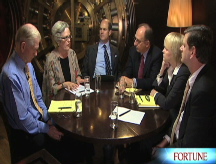 (Fortune Magazine) -- As bad as the year has been for U.S. equities, the scene around the world has been even more harrowing. Morgan Stanley Capital International's index of 21 non-U.S. markets is down 49% through Dec. 1, 2008, compared with a 43% slide in the S&P 500. But the real devastation has occurred in once-hot emerging markets. China's CSI index of 300 publicly traded stocks has fallen 63% for the year. The MICEX index of 30 of Russia's most liquid stocks is down a staggering 73%.

A year ago many economists and analysts earnestly posited that the global economy had "decoupled": Fast-growing European and so-called BRIC countries - Brazil, Russia, India, and China - could thrive regardless of what was taking place in U.S. and Western European markets.

Turns out it really is a small world after all. These rising economies are now suffering as mature countries' demand for their wares weakens.

Complicating the picture for global investors is the potential volatility of the U.S. dollar. Despite the weakness in the American economy and financial system, the dollar has strengthened in recent months as international investors have sought a safe haven for their money. Today's dollar buys about 0.79 euro, compared with 0.68 euro a year ago.

The effects of currency swings can be tricky to calculate. A stronger dollar can boost profits at foreign companies that get a lot of their sales in the U.S., for example, but it increases the cost of many raw materials those companies use, like oil, that are traded in dollars. And with Washington borrowing hundreds of billions of dollars to boost the flagging economy, the value of the dollar could easily plummet as the financial crisis eases.

For long-term investors, the best advice is to stick with strong companies and don't worry about currency fluctuations. We've identified three investments that trade on the New York Stock Exchange (and thus in dollars) that are good bets for people looking to test the international waters.

For all the handwringing about slowdowns in the Chinese economy, the country's long-term growth is undeniable: China continues to urbanize, invest in infrastructure, and consume more and more energy and commodities. Even before the central government announced a huge stimulus program to put a floor under the economy, China said that it was building 93,000 miles of new oil and gas pipelines.

Yet the stocks of many of China's suppliers have been crushed in recent months, and that makes for some interesting buying opportunities. "Any sign of recovery in demand (in emerging markets) will send stocks higher in the energy and commodity space," says Khiem Do, head of the Asia multi-asset group at Barings Asset Management in Hong Kong.

Among the possibilities, PetroChina (PTR) is hard to ignore. Its stock has been beaten down from a 52-week high of $206 on the NYSE to a recent low of $56. Buyers pounced when the stock plunged; Petro-China now trades around $79 a share. But analysts argue that it is still cheap: It is trading at about eight times the past 12 months' earnings, on par with Exxon Mobil (XOM, Fortune 500), which is likely to grow much more slowly. China, after all, remains a great market for PetroChina's products: Each day it adds 25,000 cars to its roads, and - sorry, environmentalists - none of those vehicles are Priuses. PetroChina, for anyone not cowering beneath the covers these days, should be at the core of any foreign portfolio.

A fair number of people have indeed assumed a fetal position, especially when it comes to investing in companies based in places like China and India. Those investors may be wondering if there are any good buys to be had in relatively stable Western Europe. Teun Draaisma, head of European Equity Strategy at Morgan Stanley, notes that developed Europe is trading at all-time lows relative to the U.S. That's right, all-time lows. Even so, given the economic contraction globally, he's not willing to get too frisky, so he recommends defensive names such as big European pharmaceutical and telecom stocks.

Of those, Swiss pharmaceutical and biotech company Novartis is perhaps the most intriguing. Like most Big Pharma companies, Novartis is facing a lot of pressures globally, including the loss of its most profitable patents and increased competition from generic drugs. To combat these challenges, Novartis has been redirecting its research and development pipeline. It is now focusing on the genetic underpinnings of what makes people sick, and trying to address them. The company says that it has a larger and more promising stable of drugs in development - including early-development treatments for hepatitis C, ovarian cancer, spinal cord injuries, and solid tumors.

Novartis has always been innovative, and the new research approach may goose its earnings. And if the genetics gambit takes some time to materialize, Novartis (NVS) still looks like a safe bet: The stock is trading near its 52-week low and yields a tidy 3.4%. For those looking for a healthy blue-chip stock, Novartis might be exactly what the doctor ordered.

For investors who believe that Brazil, China, India and other developing economies will bounce back, the safest bet is to buy an emerging-market fund. Lazard's Emerging Markets Equity (LZOEX) fund is open to new investors for a minimum $2,500 commitment.

Like all such funds, it's gotten crushed this year, down 61%. But its top ten holdings are mostly big, liquid companies (Korea's Samsung and Russia's Lukoil among others) that should remain upright even in the midst of a global slump.

In the last ten years the fund has returned close to 8% annually - not bad, considering that his tenure has included the two worst periods for emerging markets in the post-World War II era. By focusing on big-cap companies in solid sectors, this fund offers shareholders a lot of international exposure without an undue amount of risk.

Correction: In an earlier version of this story, we inaccurately described the Lazard Emerging Markets Equity Fund as an exchange-traded fund. It is not an ETF. We also said the minimum investment in the fund is $5,000; it is $2,500. We incorrectly identified the portfolio manager of the fund. It is James Donald.

First Published: December 17, 2008: 6:02 AM ET
How the KGB (and friends) took over Russia's economy
Related Articles