Wealthy investors were paying funds-of-funds for what they thought was access to elite management. Instead, many found their money tied up in the alleged Madoff fraud. 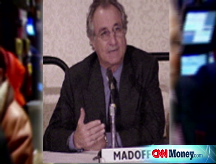 NEW YORK (Fortune) -- Not quite rich enough and not quite smart enough, a certain investing class has for years paid through the nose for what was thought to be world-class money management by investing in funds that promise access to the best hedge funds.

The Bernard Madoff scandal now calls into question the value of the so-called fund-of-fund industry.

A fund-of-funds manager puts clients' money to work in a portfolio of hedge funds or other non-traditional investment vehicles.

The client gets access to accounts he wouldn't normally have access to but the expenses are exorbitant: often a 1% management fee and between 5% and 15% of any gains.

That might feel okay when the fund is turning in stellar performance, but not so much when they're losing money, or worse, investing in a fraud.

"The fund-of-funds community has a problem because they're a step removed from the actual investment of money," says Michael Lewitt, president of hedge fund Harch Capital Management. "To convince people they add value they sell themselves as offering diversification, due diligence and access to exclusive hedge funds. The Madoff scandal hits at the heart of this model, and could be devastating for the industry."

Indeed, some advisors seemed to do little more than turn over most or all of their clients' money to Madoff -- money that may now be gone.

"The fact that very well respected fund-of-fund names like Fairfield Greenwich and Maxam Capital Management were funding a ponzi scheme for a period of decades blows up the raison d'etre for a fund-of-funds," said Lewitt.

Before the Madoff scandal broke, the average fund-of-funds had been struggling with the same negative trends slamming the average hedge fund -- investors pulling money out, poor performance and lots of volatility.

And the average fund-of-funds is down about 19% this year, underperforming hedge funds by about 2 percentage points.

"Even before these numbers came out, investors were beginning to realize that these two layers of fees made their chances of making money pretty remote," said Steve Cesinger, the chief financial officer at private equity and real estate investment firm Dewberry Capital.

According to CNBC, Fairfield is planning to sue Madoff, claiming that it was a victim of fraud and that it did due diligence and hired auditors.

"It is clear that there will be extensive litigation around this scandal and that fund-of-funds managers will be exposed to that litigation," said Steve Thel, a law professor at Fordham law school where he teaches securities regulation.

But Thel said such suits against funds of funds will address two main questions. First, did the fund managers conduct reasonable due diligence. And second, did they disclose to investors that they were not diversified.

Given that some prominent fund-of funds turned down Madoff it's hard to argue that proper research was conducted. As for whether proper disclosures were made, "that's still to be discovered," said Thel.