Christmas or Halloween for GM?

President Bush laid the treats under the tree. Here's the trick: Making them work. 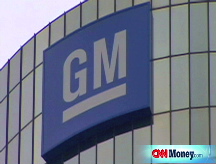 NEW YORK (Fortune) -- Be careful what you wish for. After days of publicly prevaricating, the Bush administration finally gave General Motors and Chrysler the Christmas present they had been longing for: a short-term loan to get them over the hump until they can negotiate a better deal from the incoming Obama team.

It is far better than a lump of coal, but it presents a few hoops the industry hoped it wouldn't have to jump through: setting limits on executive compensation, forbidding dividends and demanding concessions from the UAW but not the deeply entrenched auto dealers.

The bailout also appears to require the auto companies to show a "net present value" by the end of the first quarter of 2009, but it doesn't visibly explain what that involves.

This last provision is the most troubling. From all appearances, the first quarter of 2009 will represent the absolute nadir of the current recession. Economic activity will be about as lively as the Bataan death march.

For a change, the auto companies have recognized this up front by slashing production. That will lessen their opportunities to swamp dealers with unsaleable cars, but it won't do much for their income statements. Production is the lifeblood of the industry; when Detroit doesn't build any cars, it doesn't make any money.

That's one reason why Wagoner's comments in response to the bailout at a Friday news conference were so disturbing. Since GM will have very little in the way of revenue coming in early next year, how is it going to meet the government's test of "net present value?"

You have to get the money somewhere, and in GM's case, that means more cost-cutting. Yet nowhere did Wagoner offer any hints on how that is going to get done. No reorganizations were announced, no merging of departments, no elimination of nameplates, no disposal of assets.

Wagoner needs to take some cost-cutting lessons from Chrysler CEO Bob Nardelli, who has shown the door to two more executives: marketing boss Deborah Wahl Meyer and Asia chief Phil Murtagh. New to Chrysler and the auto industry, Nardelli doesn't have any emotional ties that conflict with his drive to make Chrysler solvent.

All Wagoner did on Friday was fall back on his familiar tropes of "build better cars, attain technology leadership, improve product quality." That would have been fine 20 years ago but GM's foreign competitors have moved well beyond such price-of-admission requirement and are operating at a higher level.

As for his suggestion that naysayers "please sit in and drive a Chevy Malibu", it calls to mind the comment by former GM Roger Smith in the late 1980s. When asked what he recommended for buyers who wanted to get a GM car but could only afford to spend $8,000, Smith replied, "a second-hand Buick."

Malibu is one of the best cars GM makes but it is only competitive with - and generally not superior to - competitors from Toyota, Honda, and Nissan. One of the dangers of working at GM for so long is that everything becomes self-referential after a while. From the inside Malibu looks special because it is so much better than everything else GM makes. From the outside, Malibu is just another car in a hotly contested segment.

That's a lesson that GM needs to learn - and soon - before the government money runs out.