Obama the campaigner promised labor he'd support a bill to make unionizing easier. But business is opposed and the GOP hopes it has found an issue to seize on.

More Videos
Is the Fed out of ammo? 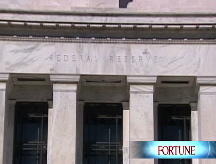 WASHINGTON, D.C. (Fortune) -- Will he, or won't he dare? That was the question that consumed an otherwise social luncheon of Republican women at the White House last week.

The "he" was President-elect Obama and the subject was "card check," a union organizing tool that is already igniting the business community in a virulent and well-funded campaign to stop it.

Obama strongly supported a union-backed card-check bill during the campaign, as does his choice for Labor Secretary, Hilda Solis. So his intentions should be clear. Except for one thing: Since his election, Obama has gone out of his way to make peace with the business community -- in the choices for his economic team, in suggesting he won't immediately repeal the Bush tax cuts.

Opening a bloody war with business over card check could sap all that good will.

Already, card-check opponents are warning that this could become the new president's gays-in-the-military moment, an early and costly stumble by a neophyte President Clinton similarly fulfilling a campaign promise without fully appreciating the fierce opposition it would stoke.

That may be wishful thinking. But Republican leaders are already counting on the issue as a badly needed motivator for their down-and-out ranks. "It certainly should help us put our coalition back together," House GOP leader John Boehner told Fortune. "This will affect every business in the country."

Boehner is right on that score: Nearly every business not already unionized -- from the neighborhood dry cleaner to the regional plastics plant, including firms in right-to-work states -- would be more easily unionized. Not since the same issue surfaced in 1979 has a proposal so thoroughly unified business owners.

On an issue like, say, trade, different industries have competing interests. And other Obama initiatives, such as health care and fiscal stimulus, divide businesses between winners and losers. But, as one card-check opponent put it, "everyone has employees," though experts say the industries most likely to be union targets are in hospitality, health care, retail and financial services.

Under current law, companies become unionized if a majority of employees support it in a secret election-after both organizers and management have made their case. The union-backed Employee Free Choice Act eliminates secret ballots, and declares the union the winner if a majority of employees openly sign a petition. Everyone knows how each employee voted. Union leader say the current secret-ballot system unfairly favors management and is a factor behind their plummeting membership ranks.

But card check, say opponents, will leave employees subject to pressure from peers and labor organizers. It also cuts management out of the process: A petition can be circulated before an employer even knows what's happening.

After the union is certified, contract negotiations begin. If an agreement is not reached within 120 days, it goes to a federal arbitration panel that can settle everything from wages and vacation policies to 401(k) plans. The arbitration decision is binding for two years, and many opponents fear this provision most, because it takes business planning out of the hands of management-or even a negotiation process-and hands it over to the uncertain risks of a federal arbitrator.

"Like walking into a dark room," is how Washington-based labor lawyer Jay Krupin describes the binding arbitration provision. "It's almost incomprehensible to figure out how a company can plan, especially in these economic times."

Krupin, a partner at Epstein Becker & Green who has negotiated more than 300 labor agreements on behalf of employers, says most card check campaigns will result in an arbitrator.

"It's almost impossible to get an agreement in that period of time [120 days]," Krupin says, noting that union organizers have an interest in "running out the clock," and betting that a federal arbitrator will land them a richer deal.

Obama will enter office with the deepest ties to organized labor since Jimmy Carter (President Clinton's centrist ways and support of NAFTA made him an unreliable labor friend.) Union leaders spent generously electing Democrats such as Obama this year, and the Employee Free Choice Act is No. 1 on their wish list.

Concerned about stagnating middle class incomes, Obama as a candidate supported the bill, and the increased number of union members it would ensure. But since the election, he has sent mixed signals on the issue. When incoming chief of staff Rahm Emanuel was asked whether his boss would pursue card check, he dodged, instead dwelling on the need to raise middle class incomes. But later, when Obama spokesman Dan Pfeiffer was asked if Obama remained committed to the issue, he answered, "yes."

Obama's announcement Friday that he will nominate Solis, a congresswoman from Southern California, as Labor secretary reinforces that affirmative answer.

Solis is a staunch ally of organized labor who recently explained her support of card check this way: "When union people get paid good wages, that money stays in the community, it helps to provide a vibrant economy."

Obama's administration won't drive the issue, though: Congressional Democrats will. Boehner predicts that card-check legislation "will fly out of the House," where majority support by Democrats is a given. The firewall, as far as business groups are concerned, is the Senate, where Democrats remain a couple seats shy of a filibuster-proof 60 votes.

Meanwhile, business is gearing up for a bruising battle, with more than a dozen groups in Washington alone focused on the issue. With their teams of Washington lobbyists and HR departments, "this is been on the radar of big business for a while," says Katie Packer, executive director of the Workforce Fairness Institute, a group formed earlier this earlier this year to fight the bill. Now, though, "this is an issue that small business is getting rabid about. They're terrified."

The Blagojevich scandal has given card check opponents some ammunition: Packer's group is running web ads advertising the fact that an unnamed official from the politically influential SEIU, a key proponent of card check, is part of wiretapped conversations with the now arrested Illinois governor. (SEIU issued this statement after Blagojevich's arrest: "We have no reason to believe that SEIU or any SEIU official was involved in any wrongdoing. In keeping with the U.S. Attorney's request, we are not sharing information with the media at this time.")

In the end, though, business' best case against a bill that will make unionizing companies easier can be summed up in one word: Detroit.

How to spend $150B in three months