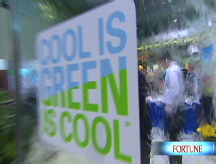 SAN FRANCISCO (Fortune) -- As anyone who has walked into Best Buy lately knows, the prices of high-definition TVs are in a precipitous freefall.

A little over two years ago, I paid $2,000 for a 37-inch Aquos 1080p LCD from Sharp (SHCAY) at a time when true high-def was still somewhat novel. I thought it was a steal at the time. Today, that same dollar figure would buy three, 37-inch sets with a better picture and a sleeker frame - or a 52-inch set with $500 left over to throw a Super Bowl party.

Wondering how manufacturers are dealing with this kind of price pressure, I dropped into the Silicon Valley office of market leader Samsung Electronics. Here's what I learned: If you hold off long enough, at some point you'll be able to cover the entire side of your house with LCDs in exchange for lunch money.

That's an exaggeration. But not by much. Scott Birnbaum, Samsung's VP of the LCD business for the Americas, says the trend in TVs looks a lot like what's happened in PCs.

To stave off top-line price erosion, Samsung and its competitors are all packing more bells and whistles into each subsequent generation of TVs. Every new model is inevitably bigger, brighter, has a faster refresh rate, higher contrast ratio, and uses less energy than its predecessor. Those features "drive people to premium sets," said Birnbaum.

Samsung has 36% percent of the U.S. market for LCD, or liquid crystal display, TVs and almost 24% worldwide. It continues to invest heavily in new technologies, like "ultra-definition," to widen the leadership gap. The company has seven LCD fabs outside of Seoul that cost as much as $5 billion each to build. Each new facility is capable of crafting larger LCDs more efficiently, allowing the company to play in everything from mobile phones and notebook displays to enormous television sets.

But at some point, chasing the consumer becomes a loser's game. Domestic sales of LCD televisions are expected to rise a scant 2% in 2009 - well below the torrid double-digit growth rates of recent years, according to new data from market research firm DisplaySearch. Which is why Samsung is eyeing untapped markets. Like outdoor.

Digital billboards would seem an obvious market for outdoor LCDs. But if you've ever tried to take your laptop to the park, you know why that hasn't really happened yet. LCDs aren't easily viewable in the sunshine. Instead of LCDs, marketers have used signs comprised of light-emitting diodes, or LEDs. LEDs light up all the signs in Times Square, for example.

But while LEDs are great at illumination, they're not much in the way of resolution. The closer you get to an LED sign, the worse the quality becomes.

LCD displays, by contrast, can show almost 17 million variations of color and are viewable from any angle. And now Samsung is rolling out a line of super-bright displays based on its DID technology that are sunlight-readable. "They're full-high def, just like you see on a TV set," said Birnbaum. One customer, Outdoor Promotions, has placed a 70-inch, 1080p advertising display on the Las Vegas strip and plans to roll out 70 more (all covered in unbreakable and graffiti-proof glass) in 2009.

Today, the biggest theoretical display today would be about eight-feet tall. That's the approximate length of the largest "mother-glass" - the thin sheets of glass that LCD screens are cut out of - now made by Samsung.

They're only "theoretical" at that size because of the problems involved in transporting a sheet of glass that big. But Samsung has come up with another end-around that it thinks will be the real key to breaking open the billboard market. It has reduced the bezel size on its LCDs.

A bezel is the area that surrounds an LCD that's used to cover electronic instruments. By shrinking the instrumentation, Samsung can now attach screens together. The narrower the bezel, the more seamless an enormous display will appear. "It's 70% more narrow than even the most narrow TV sets," Birnbaum said. "That means we're no longer limited to a form factor. The concept is to make the entire building a display.

What about all the energy that those displays will use? Birnbaum stresses that the company is developing ways to make the displays more efficient, such as opening aspect ratios. Also, it turns out LEDs may gain a new life in Samsung's idea of the future. The company is working on ways to use the low-energy bulbs to provide backlight for the LCDs. Birnbaum says the company is also exploring ideas like only illuminating parts of a display that are necessary at any given moment.

Countless sci-fi movies have shown us versions of this future, where video displays cover every blank space. Now Samsung is trying to make that vision real. At least in one sense, the future really does look bright.

Why SanDisk should hold out