For clean energy, look to the Internet

Infotech pioneer Bob Metcalfe says the skills that helped drive the infotech revolution can do the same for energy efficiency and eco-friendly materials. 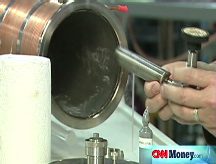 (Fortune) -- Back in the 1960s, when Bob Metcalfe was in college, he would drive to MIT in Cambridge, Mass., from his home in Brooklyn, call home once he arrived, allow the phone to ring three times and hang up, to let his mother know he'd arrived safely.

"The long-distance call was so expensive that mom didn't want to pay for it," Metcalfe recalls. "She loved me a lot -- but not that much."

Today, of course, phone calls cost nothing on evenings and weekends and, using Skype, you can call anywhere in the world for free or just pennies a minute. Information -- phone calls, baseball scores, this column, Wikipedia -- has become cheap and easy to find because of the telecom and Internet revolutions, which created an abundance of low-cost bandwidth.

Metcalfe helped drive those revolutions, and now, as a venture capitalist with Polaris Venture Partners in Cambridge, he wants to help engineer another revolution, this one in energy.

"The world needs an abundance of cheap and clean energy," he says.

You may not know his name but Metcalfe's work has likely affected your life. He invented the Ethernet in 1973, founded the networking company 3Com in 1979 and even has a law named after him, Metcalfe's Law, which says that the value of a network is proportional to the square of the number of its connected users.

Like John Doerr of Kleiner Perkins and Vinod Khosla of Khosla Ventures, Metcalfe believes that the set of skills that helped drive the infotech revolution can do the same for renewable energy, energy efficiency and eco-friendly materials.

"People who have worked for BP for 25 years have no entrepreneurial bones," he adds.

Metcalfe is irreverent, colorful and funny. He has been traveling around the country giving a slide show about what lessons drawn from the infotech revolution can be applied to solving our energy problems. Among them:

Metcalfe barely mentions Polaris's portfolio companies during his talk but he tells Fortune that Polaris has invested in startups that are developing solar energy, energy networking and microbatteries, among other products.

Green Fuel, for example, is a company where Metcalfe worked for a time as CEO and is now board chairman. Its goal is to harvest carbon dioxide from power plants to grow algae. "It's green in two ways," Metcalfe says. "It's a CO2 recycling company. Then we are green out the back door because if the CO2 is used to make biodiesel, it's a renewable fuel." The technology works but getting it to commercial scale is a challenge.

Ember, where Metcalfe also worked as CEO, provides wireless technology, called Zigbee, to offices and homes to drive energy efficiency. The system helped one hotel cut its energy costs by "up to 40 percent," according to Ember's website, where you can also watch a video of Metcalfe's talk.

As Metcalfe has become an evangelist for clean energy, he has made changes in his personal habits as well, trading in a gas guzzler for an energy-efficient Smart Car with a small Mercedes engine.

"I traded in my 12-cylinder Mercedes for a three-cylinder Mercedes," he says, showing a photo of the pint-sized vehicle. "What I most like about this car is that I now own a six-car garage."

End of the road for the Think electric car?