In revitalizing the Magic Kingdom, the CEO has built a compelling case that integrated, cross-platform media leviathans like Disney still make sense in the Digital Age. 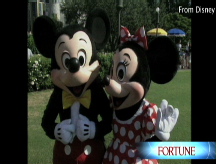 LOS ANGELES (Fortune) -- Bob Iger is inside the Royal Festival Hall in London on a September afternoon, geeking out with some young guys about two of his favorite things: tunes and technology. The CEO of Walt Disney Co. pulls out his iPhone and thumbs through his playlists, looking for a particular live U2 track from an Italian concert. Briefly the conversation is drowned out by the squeals of teen girls standing behind a nearby barricade of security guards and velvet ropes. "They're screaming for me," Iger says, glancing up.

He's joking, well aware that they're really screaming for his companions: Kevin, Joe, and Nick Jonas, a.k.a. the Jonas Brothers. The collectible-lunchbox-cute trio, with a median age of 18, are pop heartthrobs who a few weeks earlier became the first musical act ever to occupy three spots in the Billboard top-ten album chart in a single week.

They're in London to promote their Disney Channel TV movie "Camp Rock." And Iger is there - along with requisite Mickey and Minnie mascots working the red carpet outside.

Not only do the Jonas Brothers sell bushels of CDs and downloads via Disney's Hollywood Records label; in the past year they have performed live before more than a million people, were fixtures on Radio Disney, released a book via Disney-owned Hyperion that has already sold 750,000 copies, and are preparing to star in a Disney feature film. On the Disney Channel, their own show is scheduled to debut in the spring. Action figures, T-shirts, throw pillows, and sheet sets are just the beginnings of the retail onslaught.

The Jonas Brothers neatly fit Disney's tween machine: They are polite, reputedly abstinent boys, whose father is a musician and former pastor and whose mother is a former singer-actress. On the other hand, as their father, Kevin, 43, points out, "they are not characters" - his boys were not "imagineered" in any Disney product lab; they've been playing and writing their own music for years. (Rolling Stone called their latest release "as assured as any American rock album released in 2008.")

Just two years ago the boys were signed to Sony's (SNY) Columbia label and playing mostly to friends. The breakout stardom and screaming girls and the private jet across the pond would not have been possible, their father says, without Disney. "This is the natural place for them to be," he says.

The Jonases are emblematic of a creative and financial revival at the Magic Kingdom that has taken place over the roughly three years since Iger became CEO. Against long odds, Disney (DIS, Fortune 500) is back at the head of a frazzled and uncertain bunch, the fraternity of media conglomerates. In revitalizing the company, Iger has built a compelling case that integrated, cross-platform leviathans like his still make sense in the Digital Age. Who knew?

A lot of what's new comes from two big and related strategic changes Iger has made at Disney, and the way he has managed the business. One was his subtle but seismic decision to refocus the company and most of its more than 150,000 employees around its roster of "franchises," like the Jonas Brothers - Iger defines a franchise as "something that creates value across multiple businesses and across multiple territories over a long period of time."

The second change was unsubtle: Just days into Iger's new job, Disney acquired Pixar Films, bringing Apple's (AAPL, Fortune 500) Steve Jobs onto the company's board in the process. In recent weeks these moves have contributed to a string of hits at the box office, including "High School Musical," "Beverly Hills Chihuahua," and the animated "Bolt."

The Disney Channel, which has emerged as a centerpiece of the company's strategy, is expected to finish 2008 as the second-most-watched cable channel in primetime. For the third straight year it was first or second and the leader among small kids and tweens.

Meanwhile, Disney has been touting Pixar's - sorry, Disney Pixar's - "Wall-E" as a Best Picture contender for the Academy Awards. Should "Wall-E" prevail, it would be the first time Hollywood's top honor went to an animated film, not to mention to a picture released under the Disney name.

In home video, the company released "Tinkerbell" in October, the first of five DVD films that are part of its new "Fairies" franchise, which, following the success of its "Princesses," has elaborate publishing, online, and consumer products offshoots. (Check out Disney Clickables Fairy Charms, a new line of bracelet toys. When one wearer's charm is held up to another's, both people become fairy friends in Pixie Hollow, a virtual world for the more than 7.5 million fans who had created their own fairy avatars before Tinkerbell or Clickables even hit the streets.)

There is more to Disney, of course, than Disney. It counts ABC and part-ownership of cable channels Lifetime and A&E among its assets. Sports juggernaut ESPN - 80% owned by Disney - is estimated by Doug Mitchelson of Deutsche Bank to have generated around one-third of the company's $8.4 billion in 2008 operating income.