How the new Treasury secretary can show the public and investors he has an actual plan to deal with the banking crisis. 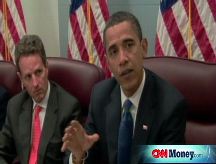 NEW YORK (Fortune) -- Don't expect Tim Geithner to set any records when it comes to doling out the rest of the Treasury's bailout fund.

Geithner, President-elect Obama's nominee to be the new Treasury Secretary, will have $350 billion at his disposal under the Troubled Asset Relief Plan when he takes office later this month. The Senate is expected to confirm his nomination in coming weeks.

Geithner will find no shortage of eager TARP recipients. The demand for low-cost taxpayer money is so great that the current Treasury Secretary, Henry Paulson, took just 77 days to pledge the first half of the $700 billion of TARP funds - prompting him to joke at one point that the Treasury had set "a land-speed record from announcing a program to getting funds out the door."

But getting funds out the door may prove trickier for Geithner. Unlike his predecessor, Geithner won't have a crisis-imposed mandate to spend as he sees fit. Instead, leaders in Congress are talking about new spending priorities and placing additional restrictions on TARP recipients.

"It's not going to be easy the second time around," said Hal Reichwald, a partner at Los Angeles law firm Manatt Phelps & Phillips. "Congress isn't going to let the wool be pulled over its eyes again."

And Geithner, currently president of the Federal Reserve Bank of New York, must reassure investors that he won't reprise the Paulson routine of rushing from one crisis to another.

What Geithner needs to do differently

Lawrence White, a finance professor at New York University, said the Treasury should follow through on its initial, unfulfilled promise to buy what he calls the "stinky mortgage assets" weighing on banks' balance sheets.

Doing so, White said, should help to set market prices for troubled assets and allow healthy institutions to raise capital in a more cost-effective manner than pouring money into banks.

Ed Gainor, a partner at law firm McKee Nelson in Washington, agreed. He said the key to solving the financial crisis is getting the mortgage-backed securities market unlocked - which Treasury could do by using its authority to buy and guarantee loans.

"TARP hasn't been used to its full extent," Gainor said. "A little bit of bold action could really help get lending going again."

But members of Congress have other ideas. Rep. Steny Hoyer (D-Md.), the House Majority leader, said on Fox News Sunday that he expects House Financial Services Committee chairman Rep. Barney Frank (D.-Mass.) to bring legislation as soon as this week that would restrict how banks spend money they get under TARP and provide for more financial relief for troubled homeowners.

Searching for a strategy

Another problem facing Geithner is that the banking system remains undercapitalized, despite the $250 billion already set aside for investments.

Desmond Lachman, a resident scholar at the American Enterprise Institute in Washington, said one mistake Paulson made was investing in banks without distinguishing between solvent institutions healthy enough to recover and those with balance sheets so weighed down by bad loans that they should be taken over by the government.

To that end, Lachman points to how Sweden handled its 1992 financial crisis. The government took over troubled banks, wiping out shareholders and writing off bad loans. But the economy bounced back within two years.

Lachman acknowledged that designating winners and losers in the banking industry won't be easy. Some big firms will fail, adding to the problems rocking the job markets and pressuring consumer spending.

But until the new administration can furnish the markets with a plan that shows it has a handle on how to recapitalize healthy banks and temporarily absorb the assets of bad banks into the government for future resale - the U.S. will be vulnerable to another crisis, Lachman says, even if Congress passes the massive economic stimulus package Obama is expected to soon propose.

"Stimulus without fixing up the banks is what Japan did in the 1990s - and we know that doesn't work," Lachman said. "The markets are desperate to know what the strategy is."

Meanwhile, letting banks take taxpayer money without punitive terms - Warren Buffett has been getting 10% dividends in his preferred stock investments in blue-chip firms compared with 5% for the Treasury, for example - has eroded public confidence in TARP without accomplishing Paulson's aim of luring new private capital.

Chris Whalen, who follows the banking industry for investment research firm Institutional Risk Analytics, said the economy won't shake its malaise until regulators stop propping up troubled big banks and instead force them into bankruptcy.

Whalen said that as Treasury and Congress consider how to deploy the remaining TARP funds, they should ignore the biggest firms - such as Citigroup (C, Fortune 500), JPMorgan Chase (JPM, Fortune 500), Bank of America (BAC, Fortune 500) and Goldman Sachs (GS, Fortune 500) - and focus instead on bulking up smaller institutions without big trading books and more exposure to average consumers and small businesses.

"You need to put the money into the banks that can lever up and lend," said Whalen. "That means avoiding the multiplicity of risk you get with the zombie banks."

And as bad as the economic meltdown of the past six months has been, Lachman noted that numerous typical recession milestones - such as a jump in corporate defaults - have yet to occur.

That means more problems ahead for a banking industry that already has suffered hundreds of billions of dollars of writedowns. Failing to confront the problem in a coherent and transparent fashion will only make matters worse.