Anger over TARP has some Republicans sounding like populists. The identity crisis comes while the party is trying to find its voice in Obama's Washington. 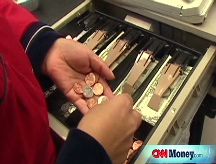 WASHINGTON, D.C. (Fortune) -- A hundred days have passed since House Republicans pushed the Dow Jones over the cliff to its biggest point loss ever with their surprise rejection of Henry Paulson's $700 billion Wall Street bailout.

Fears of a financial meltdown later changed enough minds to reverse that vote. But the GOP still can't get past the wreckage of that Monday afternoon party revolt as the Republicans struggle to find their voice under an Obama White House.

President Bush's legacy of corporate bailouts - first financial firms, then automakers - has produced a painful and politically damaging split inside his party.

Main Street versus Wall Street was the 2008 economic mantra of Democrat Barack Obama. Right now it is a more apt description of the grassroots Republican revolt against corporate-minded administration officials.

"The bailout was a bust," says former Maryland Lt. Gov. Michael Steele. "It should never have happened. Republicans should have had a little bit more you-know-what to withstand the pressure. They didn't and we're paying for it. "

Steele was one of five candidates in this month's race for chairmanship of the Republican National Committee to tell a packed ballroom audience Monday that he supports a resolution - now circulating among party insiders - condemning TARP.

TARP, of course, is the $700 billion Troubled Asset Relief Program that Treasury Secretary Paulson, backed by President Bush, insisted was needed to prevent the economy's slide into a possible depression. The resolution will be considered by party officials when they meet to vote on an RNC chair at the end of this month.

Another RNC candidate, Michigan party chair Saul Anuzis, has promoted a legislative proposal, popular with disgruntled House Republicans, that would take the $350 billion in TARP funds not yet spent and use the money to give Americans a two-month tax holiday.

The only RNC candidate who declined to support the resolution was the incumbent, Mike Duncan, a former president of the Kentucky Bankers Association and director of the Cleveland Federal Reserve.

"This is not the kind of question I believe you can answer with 'yes' or 'no,' " Mike Duncan said. "As a banker, I probably understand this as well as anyone on this stage." But even Duncan, facing a restless audience that applauded every condemnation of the bailouts issued by the candidates, insisted: "I resent the TARP money. And I think there are problems in this whole area."

With the decisively-elected Obama preparing to step into the Oval Office Jan. 20, it's the season of hand-wringing, star-gazing and pep-talking for GOP strategists trying to figure out what went wrong and how to move forward. Pollsters churn out memos quantifying the party's need to reach beyond its white middle-America base. Blackwell and Steele - both African-Americans - stressed that need for more diversity.

For two decades, the GOP was able to win elections holding together a coalition that ranged from suburban Christian conservatives to rural gun owners to urban neoconservatives. The theme that unified everyone was two-pronged: At its core, the GOP stood for free markets and a strong national defense.

Now that a Republican administration has turned Wall Street into the equivalent of a giant public utility and doled out hundreds of billions to financial firms and automakers, it's hard to know what the GOP stands for.

Maybe Paulson was right on the economics, and he had no choice. But politically, he left the Republican Party with an identity crisis - making it hard to mount any serious opposition to Obama's fiscal stimulus plan or to paint him as a "big spending liberal."

The Obama stimulus plan, which will affect most of America, is expected to carry a price tag roughly equivalent to Paulson's rescue of Wall Street. Blackwell summed up the GOP's conundrum best when he likened President Bush to Herbert Hoover this way: "Hoover opened the door to big government activism and unfortunately Mr. Bush has opened the door to Mr. Obama's big government."