How the struggling automaker seized on a radical electric vehicle to revive its reputation. 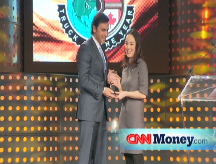 DETROIT (Fortune) -- Whenever you ask General Motors CEO Rick Wagoner what he needs to do to revive the troubled automaker, he invariably replies, "Make great cars and trucks and achieve technology leadership."

Despite GM's financial troubles, he is arguably making progress. New GM models like the Chevy Malibu and Cadillac CTS are leaders in their class and GM is making headway in fuel economy and Telematics research.

But one piece of a GM (GM, Fortune 500) revival has consistently eluded Wagoner and frustrated its executives: restoring the tattered company's good name. Until GM improves its reputation with potential customers, all the improvements it makes in its product line go for naught, and its financial problems aren't helping.

"It is hard to separate market success from business success," Wagoner explained in an interview at the Detroit Auto Show Monday. "Falling off the track hurts your reputation."

A design to grab attention

Indeed, GM's determination to improve its standing with the public dictated the creation of the Chevy Volt as the company's technology flagship. The Volt was chosen to be a leading-edge image booster rather than an immediate moneymaker for the cash-strapped automaker, according to interviews with executives. And its capabilities were designed at least as much to grab attention as to make a big impact in the marketplace.

Due to reach the market in late 2010, the Volt is a vehicle unlike any other in the world. It consists of an elaborate battery pack and a small gasoline engine. The batteries are supposed to propel the car for 40 miles on electricity alone, and the gas engine kicks in when the batteries run out of juice. GM calls it a "range-extended electric vehicle" and it may price around $40,000.

According to GM executives, the Volt was conceived in the spring of 2006 as a way for the automaker to leapfrog the technology edge that Toyota gained when it made a success of the hybrid gas-electric Prius.

Toyota (TM) had nabbed valuable free publicity when Hollywood celebrities adopted the Prius as their environmental symbol, and it was selling in ever larger numbers. GM, by comparison, had installed its first hybrid-drive system in a homely intercity bus.

Since buses use more fuel than almost any other vehicle, creating hybrid versions moved GM quickly towards its goal of promoting sustainability. But while the hybrid powertrain did enable the bus to economize on fuel, the final product wasn't much of an image builder.

Forging its own identity

In looking for ways to blunt Toyota's advantage, GM considered several alternatives, according to its research and development boss Larry Burns.

"We thought if we did a better hybrid, it would be tough to steal the [technology] trophy," he said. And since the industry would "inevitably move to plug-in hybrids," he added, GM wouldn't get much of a boost by becoming the first to develop its own plug-in, either.

So GM decided it needed an electric car. But it faced another decision when it tried to figure out how capable it should be. The range and cost of an electric car are directly related to the size of the battery pack. Use a few batteries and you limit the electric diving to a few miles, but you also hold down the cost.

GM figured that it needed a lot of batteries - and hence a higher sticker price - to give its image the needed lift. "It was an engineering solution to a marketing problem," says Burns.

It settled on a 40-mile all-electric range because it would satisfy the commuting needs of a majority of the population. The Volt's $40,000 price tag, which will sharply limit its sales volume, was given less weight, as was the fact that GM would lose money on the car. Pizzazz outranked practicality. (Burns does say he expects the price of the Volt to come down with successive generations and for it to become profitable by 2020 as the volume of production goes up)

By comparison, Toyota is pursuing a sharply different strategy. It plans to introduce a plug-in version of the Prius that will only go 12 miles on a charge of electricity.

Says Toyota engineer Masatami Takimoto: "We believe a 12-mile range on one charge is reasonable. If the car had any more range, it would require more batteries, and this is not part of our plans."

As a result, the Prius will be significantly less expensive than the Volt, perhaps $10,000 or less, and it could be expected to sell in much larger numbers.

GM executives say that so far the Volt has been successful at raising the automaker's profile and helping to refurbish its image. Whether it continues to do so once it arrives on the market with its high price tag and limited number of potential customers will be another question.

Ford: No Volt for us