Breaking up Chrysler is hard to do

Executives fight the rumor mill as the company struggles. Is Jeep for sale? 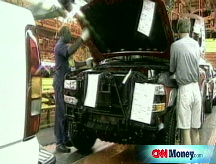 NEW YORK (Fortune) -- Chrysler CEO Bob Nardelli faces a predicament similar to that of a finance minister in an inflation-challenged third world country.

The finance minister has to keep insisting that there are no plans to devalue the country's currency - up until the second that he actually does. To give hints ahead of time would cause a run on the treasury and ravage the economy.

Likewise, Nardelli must keep insisting that there are no plans to sell or dismember Chrysler - up until the second that he actually does. Once customers and employees believe the company is about to change hands, its value will diminish significantly.

Whether Nardelli is actually successful in finding a buyer is another question. There aren't many automakers hankering to expand in the current environment and those that do may not have the financial wherewithal. And it is unlikely that another private equity buyer will come along, given the return that Cerberus has made on its investment to date, which closely approximates zero.

But a couple of things are obvious. One is that Chrysler is more valuable to a buyer than it is as an independent, standalone company. It doesn't have a broad enough product line, strong enough brands, robust enough technology, or a large enough international presence to survive on its own. A buyer could pick the pieces of Chrysler that are the most valuable and liquidate the rest.

It is also obvious that the Jeep brand and its line of products represent Chrysler's most valuable asset. And that presents another problem for Nardelli. With its unique appeal as the all-American off-road vehicle, Jeep would be valuable to any foreign automaker seeking to do business in the U.S. Renault-Nissan is constantly rumored to be a buyer, but almost any European or Asian company would find it attractive.

But Nardelli can hardly sell off Jeep by itself without destroying the value of the rest of Chrysler. If support from Jeep is withdrawn, the Dodge and Chrysler brands would have a hard time surviving on their own. As distressed properties, they would be all but worthless and would sell for bargain basement prices.

Chrysler co-president Tom LaSorda drove home the point in a hastily-scheduled conference call with reporters Wednesday, called to bat down the latest Jeep rumor. "We will not separate the brands from the company," he insisted.

That's not the only stumbling block. As LaSorda pointed out, doing deals is a lot more complicated now that Chrysler has accepted $4 billion in loans from the federal government. A condition of the loans is that government has to approve any financial transaction in excess of $100 million.

With that big loan outstanding, it would undoubtedly look askance at a prized asset like Jeep rolling out Chrysler's door.

The mill grinds on

Yet LaSorda's comments or the business logic aren't going to stop the rumors. With every one of its assembly plants shut down so that dealers can sell off excess inventory, Chrysler is generating almost no revenue. At the same time, it is paying salaries, reimbursing warrantee claims, and developing new 2010 models like the Chrysler 300, Dodge Charger, and Jeep Grand Cherokee - all of which cost money. That's a recipe for cash burn at a ferocious rate.

Chrysler will continue to sell off non-earning assets. Some Chinese automakers could buy tooling and assembly plant machinery used to build discontinued models. But Nardelli has a far more critical job in front of him than worrying about who may turn up on eBay.

By March 31, he has to demonstrate that Chrysler can survive as an independent company in order to qualify for another chunk of federal money. If he can, Nardelli will qualify as the miracle worker of the year - and perhaps win himself a job as finance minister at some troubled third-world country that needs help with its inflated currency.