Richard Baker was once a fierce critic of hedge funds. Now he wants to convince Washington they're on the level. 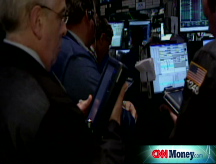 NEW YORK (Fortune) -- When the headhunter first called Richard Baker in late 2007 and asked him if he was interested in becoming president and CEO of the Managed Funds Association - the hedge fund trade group - Baker thought it was a joke. "My reaction was, 'You want me to do what?'"

An 11-term Republican Congressman from Louisiana, Baker was about as likely a candidate to run the MFA as Bill Gates is to run an Apple in his home office.

Over the years, Baker had emerged as a fierce and independent critic of the financial services industry - pushing for tougher regulation of hedge funds after the 1998 collapse of Long Term Capital Management.

More famously, he held hearing after hearing about Fannie Mae and Freddie Mac. Back then Wall Street cared more about the damage Baker was doing to Fan and Fred's stock and bond prices than the systemic risks the duo posed to the financial system.

The MFA assured Baker that its once-secretive members were prepared to be more open and less defensive in its dealings with Washington. They just needed a leader who could show them the way.

As it turned out, the MFA approached Baker at the right time. He'd recently been passed over for a leadership post by his Republican colleagues, and he was still smarting over President Bush's refusal to sign on to his so-called "Baker Plan" for saving post-Katrina New Orleans.

Baker wanted to give the federal government the ability to buy up land in stricken neighborhoods, clear it and then re-sell it to developers. He feared - correctly, it now seems - that failing to rebuild quickly would relegate New Orleans to a diminished future.

Baker has been on the job with the MFA for a year, but in many respects his real job won't begin until February 2. That's when he'll be free to lobby his former colleagues. Federal rules prevent former members of Congress from engaging in lobbying less than a year after they leave office.

Given the scorn that's been heaped on hedge funds lately - for everything from oil prices to the Bernie Madoff scandal - Baker's testimony will surely be in high demand from the House and Senate. His promises of a kinder, gentler hedge fund industry will be put to the test.

"I'm selling my house and moving into the Cannon Building," Baker quipped, referring to the House office building.

I recently spoke with Baker about some of the challenges the hedge fund industry now faces:

I realize Bernie Madoff didn't run a hedge fund, but are you worried that this scandal will result in more regulation and forced disclosure for all types of loosely regulated investments, hedge funds included?

We have a lot of work to do to educate people about the differences between what Madoff was actually engaged in and what our members do. For instance, he was his own broker-dealer clearing his own trades. Based on our best practices, our members use independent broker-dealers who validate and close our trades. What he did was all only permissible because there weren't any outside eyes - any third parties - looking at anything.

Maybe so, but I doubt your former colleagues in Congress are going to pay attention to such distinctions.

Sure. It's going to be difficult for us due to the general framing of this matter.

At the very least, don't you think Congress is going to demand that the voluntary best practices you cited get codified into law?

The only thing about codification of anything is that once you put in into law, it takes an act of Congress to redo it. Our best practice project is a continual, ongoing, evolving project. The best practices of a year ago may not be the best practices now.

Based our previous discussions, I know you worry a lot about unintended consequences.

Look at the short-sale rules. In October, everybody got excited about short sales, so the SEC issues an emergency order banning short sales for 1,100 stocks.

Well, in the convertible securities world, when a company is looking for non-traditional financing to fund short-term liquidity needs, it can come to a hedge fund. And rather than take cash at maturity, we will take shares of common stock. But in order to make sure the value of that repayment doesn't deteriorate, we short the underlying common stock as an insurance method.

Turns out that 65% of the convertible securities we bought were from banks. The irony is that at the depth of the financial crisis, when banks needed any source of credit they could get, the SEC essentially wiped out the convertibles securities market. If we couldn't go short the stock, we weren't going to make the loan. They took out billions in liquidity to the financial markets at a time when it was needed most.

Your members took a lot of heat over the summer for supposedly driving up the price of gasoline. Are you getting any thank-you's now that prices have come down?

I keep looking for that headline on how speculators are driving down prices. Seriously though, it's amazing how all this stuff goes just one way.