Say goodbye to the big Citi

Without a clear direction for the financial services giant, its rivals may one day own pieces of the empire that once was Citigroup. 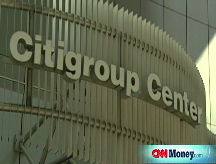 NEW YORK (Fortune) -- Citigroup CEO Vikram Pandit is finally dismantling the house that Sandy Weill built, but will the businesses that remain form a durable, well-integrated player? Or will the remaining parts be so mismatched that Citi will need to liquidate? The sooner Citi's destiny becomes clear, the sooner banking will recover.

"Citi's future is casting a pall over the industry," says Nancy Bush, an independent banking analyst. "The world is asking, 'What will be left of their operating model?'"

Here's the simple answer: After Citi's plan to fold Smith Barney into a joint venture with Morgan Stanley and a pledge to shed one-third of its $2 trillion in assets, what will remain is both a jumble, and basically weak. Hence, the chances that Citi will be forced to sell everything to competitors that can integrate its disparate parts into their own, better-managed franchises, is extremely high.

Roots of the trouble

First, let's summarize how Citi (C, Fortune 500) got into trouble in the first place. "Citi had under-reserved for years," says Meredith Whitney, the Oppenheimer analyst. "It made money by drawing down loss provisions." In other words, Citi booked profits by reducing the capital held in reserve for bad loans during the economic boom when few mortgages or credit cards were defaulting, wrongly assuming the good times would keep rolling.

Under former CEO Chuck Prince, it also heavily invested its own capital in collateralized debt obligations (CDOs), subprime mortgages and other exotic products, using immense leverage to juice the returns. As long as interest rates kept dropping, and consumers stood flush, Citi was a sumptuous profit machine, generating around $25 billion a year in net earnings.

Because Citi's reserves were so blatantly low, and because its risky bets were so enormous, it suffered far bigger losses than leading competitors JP Morgan (JPM, Fortune 500), Bank of America (BAC, Fortune 500) and Wells Fargo (WFC, Fortune 500). But the real problem is that the good times masked basic, structural problems in Citi's core businesses ­ including its staple franchises that stay following the Smith Barney sale.

So let's examine what Citi is likely to keep. The big remaining businesses are U.S. and international consumer and investment banking, including corporate lending. Citi has pledged to sell its consumer credit arms, and although the company apparently has no intention to sell its excellent treasury and securities services division, the business, which provides cash management to corporations and hedge funds, is one of its most attractive units for potential buyers.

Citi's single biggest problem is the small reach of its retail banking business in the U.S. Citi has only around 800 domestic branches and just 2% of U.S. deposits. By contrast, Bank of America boasts over 6000 branches and controls 14% of deposits. B of A, JP Morgan, and Wells Fargo have all built coast-to-coast franchises in the last several years, while Citi fiddled.

As recently as a few months ago, it looked as though Citi could finally build a national presence through a merger with Wachovia. But at the last minute, Wells swooped in and won Wachovia. Losing that deal is a major reason Citi's future is now so cloudy.

Citi's puny branch network is a severe handicap. It lacks the deposit base to fund its huge portfolio of U.S. loans. Hence, it's forced to rely far more on securitizations than its competitors. The securitization market has shrunk dramatically. To sell bonds backed by mortgages or credit cards, banks need to lure investors with high interest rates. That gives banks with big reservoirs of deposits a wide advantage over Citi. Result: Citi is being forced to severely shrink its consumer loan portfolio far more than its rivals. Its lack of capital, the result of massive writedowns, is compounding the problem.

How about Citi's "crown jewel" from the days of long-serving CEO John Reed - its international franchise? Indeed, Citi has the largest global retail network of any U.S. bank. While JP Morgan and B of A were expanding domestically, Citi was doing deals in Mexico and Turkey. It has a portfolio of $500 billion in consumer and corporate loans outside the U.S. But as in the U.S., Citi is a mile wide and an inch deep. Citi is seldom number one in a national market.

It typically ranks 3rd or below. As a result, it lacks the economies of scale of national competitors, and its costs for processing checks, loans and credit cards tend to be higher. As Bank of America CEO Ken Lewis told Fortune, referring to both Citi's U.S. and international retail businesses, "Citi's problem is being unimportant in many places."

The U.S. and international consumer businesses aren't just wobbly on their own - they form an awkward fit with the investment bank, which is fading fast. Citi has already pledged to drastically reduce the high-wire proprietary trading that generated huge profits in the boom and brought the company to grief in the bust.

It's also falling fast in the underwriting tables; to win business in the past, Citi made a practice of extending cheap credit to customers, a practice it can no longer afford. The shrinking investment bank has little synergy with retail banking. The businesses, pay-scales and cultures are utterly disparate.

The new Citi is emerging as a hodgepodge of ill-fitting parts that would perform far better with different owners. But even if Citi totally breaks apart, its demise wouldn't represent the death of the financial one-stop shop.

As Nancy Bush puts it, "Citi never was a financial supermarket. It didn't cross-sell products. It was a series of silos." Rivals like B of A and JP Morgan are showing how to sell the same customers mortgages, credit cards and car loans, and how to entice small business clients to buy their cash management services. Those were the supermarket skills that Citi never mastered.

The empire was built but never tamed. Now, it's falling apart, and its competitors are mastering the great experiment that Sandy Weill engineered. They may end up owning the pieces that were once Citigroup.