Fear is back on Wall Street

Stocks plunged Wednesday, raising concerns about how long the recession will last and adding to doubts about the effectiveness of the bank bailout. 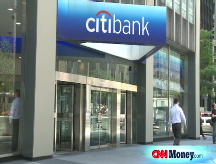 NEW YORK (Fortune) -- Fears about the health of big financial firms and the overall economy have roared back into play, sending the stock market tumbling toward its lowest levels since last November.

The Dow Jones Industrial Average dropped about 300 points one point Wednesday morning following the latest round of dark economic news. Retail sales fell 2.7% from a year ago in December, a decline twice as large as economists had expected.

In the technology sector, Canadian telecom equipment vendor Nortel (NT) filed for bankruptcy after years of struggling to compete in a fast-changing communications market.

Making matters worse, all of these mounting problems in the economy only add to the worries about the health of balance sheets across the banking industry.

Despite the Bush administration's $250 billion infusion of capital into the banking system, investors continue to fear that big financial firms' capital - already pressured by souring mortgages and trading losses - will be eroded by rising defaults on credit cards, auto loans and other types of lending as people around the globe lose their jobs.

"The financial services group is just in free fall," said Bill Larkin, a fixed income portfolio manager at Cabot Money Management in Salem, Mass. "The scale of economic destruction we're seeing right now is going to take a long time to turn around."

Adding to the unease was the news of the latest restructuring effort at Citigroup (C, Fortune 500), the troubled New York financial giant that has received more than $300 billion in federal aid and loan guarantees in recent months. Citi said Tuesday it would spin off 51% of its Smith Barney brokerage arm into a joint venture with Morgan Stanley (MS, Fortune 500).

The move will help Citi to shrink its $2 trillion balance sheet and bring in $2.7 billion in cash, but investors weren't bowled over: Citi shares plunged nearly 20% Morgan Stanley dropped about 8% as well.

As go banks, so goes the market

Wednesday's banking-sector swoon extended a theme that has played out since 2009 began. The stock market has fallen steadily - the Dow is off 7% this year after posting a 38% plunge last year - but the shares of big financial firms have been among the hardest hit. The KBW Bank index, which fell more than 5% Wednesday, is off 19% for the year.

Among the many financial industry losers have been Bank of America (BAC, Fortune 500), which slid 5% in midday trading Wednesday to its lowest point since 1995.

Analysts expect the firm, which just completed its purchase of brokerage giant Merrill Lynch, to post a fourth-quarter loss next week and that it may cut its dividend for the second time in three months to preserve capital.

"One of the main concerns investors have with bank stocks is fear that the banks will be forced to raise equity capital that will lead to significant dilution to common shareholders," Citigroup Global Markets analyst Keith Horowitz wrote in a note Monday.

The unrest in the financial sector highlights one of the shortcomings of the official response to the panic that broke out last fall after Lehman Brothers failed, Larkin said.

"Part of the problem is that the companies that made mistakes and took on too much risk are being propped up," he said. "Normally, the competitors benefit when the poorly run companies fail, but now no one is able to benefit because there have been no failures."

"We've been saying around here we were going to get a dose of reality in the first quarter," Larkin said, noting that stocks posted a modest year-end rally even as economic data pointed to a deepening slump. "Now we're seeing that things are even worse than anticipated."

Holiday sales: Much worse than feared