Most economists agree that both are needed. The debate comes when they ask how split it.

By Alyssa Abkowitz and Lawrence Delevingne
January 19, 2009: 9:54 AM ET
Throwing money at problems 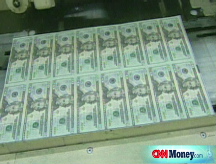 The proposed $825 billion plan mixes government spending with tax breaks in the hopes of raising gross domestic product by 3.7% and saving or creating 3.3 to 4.1 million jobs by the end of 2010.

While the final breakdown of the package remains to be seen, much of the debate centers on the effectiveness of government spending versus tax cuts as means of reviving the economy. Currently, the plan includes roughly $550 billion in spending and $275 billion in tax cuts.

Turn on the money tap...

Most economists support the emphasis on spending, saying government expenditure does more to boost gross domestic product, a key indicator of fiscal health.

In other words, spending delivers more bang for the buck because each dollar paid to a worker building a wind turbine, for example, is then re-spent on groceries or clothing, causing a fiscal ripple-effect. Conversely, a worker might save a third of the money he is given in a tax cut, with some of the spending going toward imports, which would also reduce the stimulus to GDP.

According to a Jan. 6 study by Mark Zandi, chief economist at Moody's Economy.com, GDP grows by $1.59 for every dollar spent on infrastructure, while the increase from a corporate tax cut is only $0.30.

"The mix between spending increases and tax cuts is roughly right," Zandi says. "Spending packs a bigger economic punch, but tax cuts are helpful because even though they're not as economically efficacious, they do work more quickly."

Based on Zandi's study, some of the most efficient ways to spend government money are temporarily increasing food stamps (a $1.73 GDP increase per dollar), extending unemployment benefits ($1.63), increasing infrastructure spending ($1.59) and upping direct aid to financially strapped states ($1.38).

The draft bill reflects that emphasis on spending. The approximately $550 billion in government spending includes: $159 billion to education; $154.5 billion for health care; $92 billion to infrastructure; $58 billion to investments in energy; $71.5 billion in aid to the poor and unemployed; and billions more to science, technology and housing.

...or ease the tax burden

Still, tax cuts can work quickly get bipartisan support among lawmakers, and the current bill contains $275 billion in breaks for business and individuals. For companies, cuts include savings on capital investment and past profits; individuals will likely get $500 of relief ($1,000 for families), a $2,500 college tuition tax credit, and home-buyers will owe less.

Some research shows the positive effect of tax cuts on GDP gets short shrift. Christina Romer, who studied the subject while a professor at the University of California, Berkeley - and who Obama chose as Chairwoman of his Council of Economic Advisers - says don't underestimate them as an effective means of stimulating the economy.

Many conservatives want to adjust the tax section of the package, although most acknowledge that government spending is necessary. Norman Ornstein, a resident scholar at the American Enterprise Institute, agrees with the two-to-one spilt between spending and tax cuts, but he believes the mix of tax breaks currently proposed will not have the "major simulative effect" that's intended.

"It's difficult to get money out there and moving into the pipeline as quickly as you would like," he says on the spending programs. "What you want to do at this point is to get money into the hands of people who need to money to spend on their daily existences."

James Galbraith, an economist at the University of Texas, says payroll tax cuts are better than rebates, but won't do a lot for the GDP immediately because most people will use the money to pay off credit card debt or mortgages. "A fair amount of this money," he says, "will just go into shoring up the balance sheets of households."

Other observers want far less spending. "Any increase in government spending is a bad idea," says Daniel Mitchell, a senior fellow at the Cato Institute, noting that the best stimulus is to downsize government and implement a flat tax. The most wasteful part of the Obama plan, he says, is to aid states and local municipalities: "It's like giving an alcoholic the key to a liquor cabinet."

But those big goals and big spending come with a hefty price tag. The government projects the federal deficit will reach $1.2 trillion this year for a total national debt of $11.5 trillion - and that's not including the proposed stimulus package.