Wilbur Ross gets his bank

Two weeks after telling CNNMoney.com he would buy a bank, the billionaire investor acquired a controlling stake in a small Florida institution. 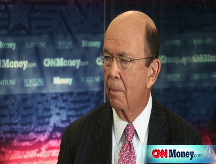 Ross, who came to fame two decades ago as a restructuring expert at Rothschild and made a mint earlier this decade buying and selling troubled steel companies, took a 68% stake in closely held First Bank & Trust of Indiantown, Fla., Ross said in a press release.

"This is one of the few banks in Florida that has avoided the credit crisis very effectively," Ross said in the release. "Because it is well positioned to grow, I am prepared to provide the institution with additional capital so that it can continue to thrive and continue to serve as a stalwart financial institution in the communities it serves."

Ross did not disclose how much he paid for his stake, but the deal is valued at $7.3 million, according to a report on TCPalm.com, a news site featuring reporting from several newspapers in the Palm Beach, Fla. area.

The fact that Ross bought a bank does not come as a major surprise. Earlier this month, Ross said in an interview with CNNMoney.com that he planned to acquire a bank to gain stable funding for his private equity business.

"We will end up with a bank, there is no doubt about that," Ross said in the interview.

Ross bought the stake in First Bank & Trust from Linda M. Post, the widow of the bank's former chairman. His family founded the bank in 1959. Mrs. Post will retain a 23% stake in the bank and stay on its board as chair emeritus.

The purchase is small by Ross' standards but extends a recent foray into the financial sector.

Over the past year or so he has taken a big stake in bond insurer Assured Guaranty (AGO), purchased H&R Block's (HRB) subprime mortgage servicing unit and acquired American Home Mortgage Investment out of bankruptcy.

The rising cost and declining availability of credit since the financial sector tsunami hit in late 2007 has made acquiring low-cost bank funding a top priority for investors of all stripes, Ross told CNNMoney.com earlier this month.

"What is important is to get access to a stable, low-cost source of funding," Ross said. "That is what we are interested in."

Wilbur Ross: I will buy a bank

When private equity's barbarians were on top