President-elect Obama and Congress must fix the financial sector before any stimulus plan can work.
Banks not shying from TARP 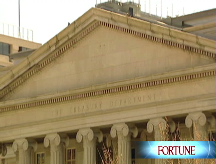 Economy rescue: Adding up the dollars
The government is engaged in an unprecedented - and expensive - effort to rescue the economy. Here are all the elements of the bailouts.
View chart
Bernanke: banks need more funds 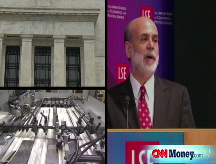 House Democrats have proposed spending $825 billion over two years on tax cuts and new government programs in a bid to offset the steep decline in the economy.

But some economists warn that no matter how quickly the government deploys stimulus funds, the effort may not support a sustained recovery unless officials first take decisive action to close the gaping wounds in the financial sector.

But new cracks have been emerging by the day, which only increases the urgency.

"The financial system needs to be fixed, in a more forceful way," said Northern Trust economist Asha Bangalore. "We can't afford to postpone this any longer."

The Treasury Department decided early Friday to extend Bank of America (BAC, Fortune 500) another $20 billion to help it deal with rising losses tied to its Merrill Lynch acquisition. BofA reported Friday morning that Merrill lost more than $15 billion in the fourth quarter.

Citigroup (C, Fortune 500), the recipient of more than $300 billion of federal aid in recent months, is trying to shrink its way to long-term viability.

The bank reported a more than $8 billion quarterly loss Friday morning, and also announced that it is splitting into two businesses. That follows Citi's decision earlier this week to sell a majority stake in its Smith Barney unit to Morgan Stanley (MS, Fortune 500).

Those setbacks - together with a promise by the incoming Obama administration to limit dividend payouts by recipients of "exceptional" government aid to a penny a share quarterly - have helped to send bank stocks tumbling again.

The KBW Bank Index, a key barometer for the banking group, has lost almost a quarter of its value so far this month. That's on top of a dreadful 2008, in which the index plunged 50%.

Investors are fleeing bank stocks again in part because the drains on profits are getting bigger. While big banks spent 2008 taking billions of dollars of losses on ill-advised mortgage investments and misguided trading bets, banks of all stripes now face rising losses on their credit card, auto loan and other portfolios.

With unemployment rising and credit scarce, those trends aren't likely to moderate any time soon.

More capital is not enough

As a result, banking experts expect many of the big institutions will rebuild their capital cushions against losses - even though many of them already received funds from Paulson's Troubled Asset Relief Program, or TARP, just a few months ago.

University of Oregon economics professor Tim Duy said "there's a nontrivial risk" that the government will have to allocate even more capital to banks in the next few months.

"This spring we're going to find out just how badly the deteriorating economy has affected bank balance sheets," Duy said.

But the experience of the past three months, in which lending failed to pick up even as governments lavished banks with new capital, suggests that merely filling the holes on bank balance sheets won't be enough to get credit flowing again.

That's why some economists are saying the U.S. government and other governments around the globe must go further.

Indeed, while the Federal Reserve and other central banks have vastly expanded the scope of reserves available to the banking system, banks remain leery of lending as asset prices continue to fall and many developed countries sink deeper into a recession.

Those trends, Komileva said, translate into a crisis of confidence about the solvency of borrowers on all sorts of loans. The crisis is particularly acute because consumer debt-to-income readings were setting records even before Lehman Brothers collapsed in September and sent the economy further into a tailspin.

How to really fix the banks

Komileva says the answer isn't to expand the government role in the economy, but to set up incentives for private lenders to start making loans again. One way to do so, she said, is for governments to offer tiered loan guarantees to lenders in a bid to cover what she calls the "excess risk" that borrowers will default.

A plan of this nature could encourage lenders to make loans in spite of the enormous uncertainty now afflicting practically every economic sector.

"The key is to get market structures working again and restart private capital flows," Komileva said.

There are other options as well. Gary Townsend, a former bank analyst who runs Townsend Hill Capital in Chevy Chase, Md., advocates suspending the mark-to-market accounting rules that he thinks are responsible for many of the writedowns that have sapped bank capital.

Because of these rules, banks have to report what the fair value of their investments were if they were to sell them now -- and the value of many of those investments, especially mortgage-backed securities, have plunged in the wake of the credit crunch.

"They just need to admit that adopting that rule was a stupidity," Townsend said. "They need to put that one where the sun doesn't shine."

While the latest collapse in stock prices reinforces the fact that banks need capital, Townsend doesn't believe rescues like the one the government just unveiled for Bank of America will become commonplace.

He said banks that have either failed or need help fall into three categories: thrifts that lent aggressively such as Washington Mutual, banks that made too many acquisitions such as BofA, and investment banks that levered up too much such as Lehman Brothers.

Whatever approach the Obama team takes, it will walk a thin line with legislators eager to crack down on fat cat banking types and investors who are wary of an expanded federal presence.

"The government needs to be careful that it doesn't make itself the only source of capital," Townsend said.

Senate vote fails, Obama gets $350B